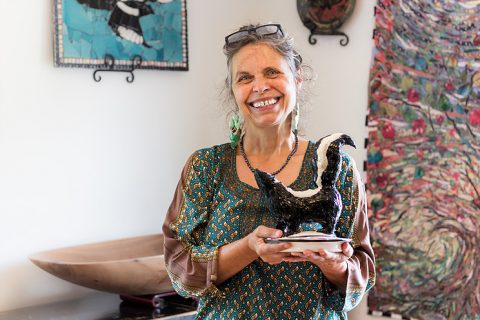 Deb Kuzyk (BFA 1983) and Ray Mackie (BFA 1978) have been collaborators in life and art since their NSCAD days and even before. Together known as “Lucky Rabbit Pottery,” they’ve been based in beautiful Annapolis Royal since 1999 in a sunny yellow house that contained their living quarters, studio and showroom.

But while Ray decided he needed to retire, Deb wasn’t ready. And so, Lucky Rabbit has gone through a new incarnation.

“I had this idea that maybe I could share the space with other artists,” says Deb, who received a small grant from AIRO (Annapolis Investments in Rural Opportunity) to transition her business.

Just by coincidence, Deb heard from a friend, Janel Warmington, who was ready to part ways with her long-time collaborator and set up on her own, making leather and fabric bags and accessories. Not long after, another Annapolis Royal artist, Kim Gunn, told her she was seeking studio space too, for her small business making tartan products from Annapolis Royal’s official tartan which she designed.

From there, things moved quickly. Ray and Deb moved out of their 129-year-old house in April and renovations began in earnest. Lucky Rabbit Pottery was reborn as Lucky Rabbit & Co., re-opening its doors in May.

The house, which directly faces Annapolis Royal’s farmers market, has been hopping all summer. There are a number of studio/shop spaces, including Janel Warmington’s Atelier 1605, Kim Gunn’s Tartan Wave, Dan Froese Photography and Design, and a small sound studio for musician/composer Scott Williams. 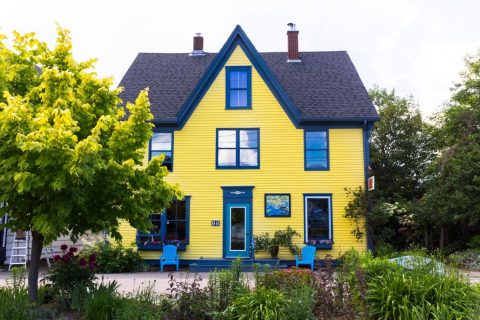 The Lucky Rabbit Tile Shop, staffed through the summer by NSCAD student Maria Longmire, is on the first floor while the Lucky Rabbit Gallery is on the second floor in Deb’s old kitchen and living room space. The gallery showcases Deb and Ray’s work, as well as ceramics by NSCAD student Toni Losey and Suzanna Steinitz and Hans Katzur of Riverside Pottery. Other artists represented include Jeff Langstaff of Empire Mirror, Jay LeBlanc of Enclosing, Beth Oberholtzer of Oberholtzer Design, Rachel Ryan of Greenwood House Studio and Nicola Rapsey.

There’s also a pop-up art gallery on the third floor; it recently displayed the paintings of Wayne Boucher (BFA 1975) and now shows the work of artist-blacksmith Brad Hall from nearby Granville Ferry.

And now, Deb’s had another brainwave. With support from Awesome Annapolis, she’s launched a search for an emerging artist to act as Lucky Rabbit & Co’s artist-in-residence. She’s offering one month’s free rent for a studio space and apartment. The winning artist, chosen by a jury of five artists, can decide when they’d like to come in 2018: whether during the winter when it’s quiet or in the summer when there’s lots of hustle-bustle and the opportunity to get exposure from a lot of people. The deadline for applications is October 31.

Lucky Rabbit’s reinvention has re-energized Deb as an artist and entrepreneur – and perhaps Annapolis Royal too.

“It really has been fantastic. We’ve really been embraced and it’s been busy,” she says. “It’s like an art mall, where you can come in and see all different kinds of art and artists. We all help each other in the house and it’s been a lot of fun.”