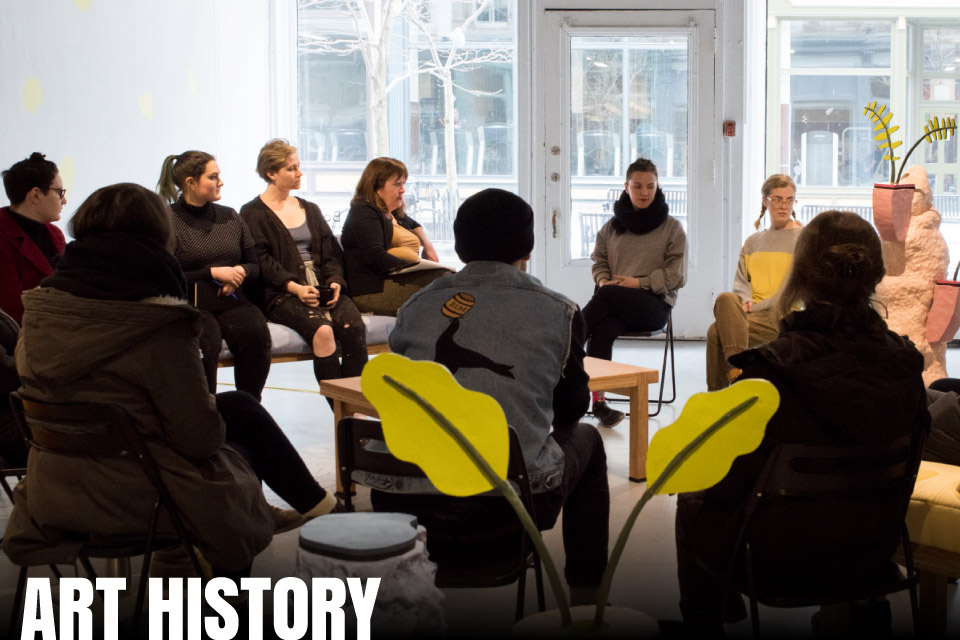 NSCAD was the first Canadian degree-granting institution to offer a degree in Art History. Decades later, the Art History and Contemporary Culture Division is still on the cutting edge of conceptual art criticism and practice. With a strong emphasis on theory, the Division offers courses in art history, literature, film history and theory, art education, and critical studies. Ranging from introductory surveys to senior seminars, these courses bring together students from all Divisions, fostering a cross-disciplinary flow of ideas and interaction.

Many Art History alumni go on to work in museums and art galleries or begin graduate work in a variety of fields, including history, media studies, and visual culture. Others embark on successful careers as professional art critics, journalists, and teachers.

The Art History and Contemporary Culture Division will strengthen your skills as a critic not just of fine art but of craft, design, and architecture as well. By engaging in lively debates with faculty and colleagues, you will graduate as a skilled writer and an astute observer of contemporary culture.

Karin Cope is an Associate Professor and poet. She is the author of Passionate Collaborations: Learning to Live with Gertrude Stein, and, since 2009, a photo/poetry blog entitled Visible Poetry: Aesthetic Acts in Progress. Her research interests include eco-criticism and pedagogy.

Ann-Barbara Graff is a Professor and the Vice President, Academic and Research at NSCAD University. She holds a PhD, MA and BA in English from the University of Toronto. She practices critical theory, particularly the intersection of 19th century literature and science.

Dr. Julie Hollenbach is an Assistant Professor of Craft History and Material Culture. Dr. Hollenbach is a NSCAD alumni (BA and BFA 2008) who has been instructing students at the Halifax-based university on a contract and sessional basis for the past six years. She has taught a variety of courses, including Craft and Design History, Craft, Culture and Identity, and History of Global Textiles.

David Howard received his PhD from the University of British Columbia in Art History and also holds degrees both in Canadian History and Fine Arts (Painting). He has published numerous book chapters, articles, and reviews on the history, politics, and theory of modernism and postmodernism in the United States and Canada after World War II. He focuses on art criticism and theory as well as 19th and 20th art history.

Dr. Marissa Largo is a researcher, artist, curator, and educator whose work focuses on the intersections of race, gender, settler colonialism, and Asian diasporic cultural production. Her forthcoming book, Unsettling Imaginaries: Filipinx Contemporary Artists in Canada (University of Washington Press) examines the work and oral histories of artists who imagine Filipinx subjectivity beyond colonial logics. Dr. Largo is also co-editor of the ground-breaking anthology Diasporic Intimacies: Queer Filipinos and Canadian Imaginaries (Northwestern University Press, 2017). Since 2018, she has served as the Canada Area Editor of the Journal of Asian Diasporic Visual Cultures and the Americas (ADVA). Dr. Largo was awarded the 2019 Outstanding Dissertation Award from the Research on the Education of Asian and Pacific Americans (REAPA) special interest group of the American Educational Research Association (AERA) was the recipient of the 2020 OCAD University Teaching Award for Continuing Studies and Non-Tenured Faculty.

As an Art Education specialist, Dr. April Mandrona teaches courses as part of NSCAD’s Visual Arts Certificate for Teachers and the Mount Saint Vincent University BEd program. Dr. Mandrona is also developing NSCAD’s new graduate program in Art Education. She received her doctorate in Art Education from Concordia University in Montreal, Quebec, and was a SSHRC postdoctoral fellow at McGill University in the Department of Integrated Studies in Education. She has published articles and book chapters on young people’s visual culture, rurality, ethics, and participatory visual research. She recently guest edited a Special Issue of Girlhood Studies: An Interdisciplinary Journal, “Ethical Practice and the Study of Girlhood.” Her co-edited volume, Visual Encounters in the Study of Rural Childhoods (Rutgers University Press) will be released in the spring.

Marylin McKay is an award-winning author and pre-eminent Canadian art historian. She received a PhD in Art History from the University of Toronto. She is the author of A National Soul: Canadian Mural Painting, 1860s to 1930s (McGill-Queen’s University Press, 2002), Picturing the Land, Narrating Territories in Canadian Landscape Art, 1500 to 1950 (McGill-Queen’s University Press, 2011), as well as articles in scholarly journals and chapters in books on North American art. Her current research is based on the Canadian reception of Walt Whitman. As part of this research she is working on a biography of Flora MacDonald Merrill Denison.

Dr. Charmaine A. Nelson is a professor who researches and teaches subjects related to postcolonial and black feminist scholarship, transatlantic slavery studies and black diaspora studies. Dr. Nelson is also NSCAD’s Tier 1 Canada Research Chair (CRC) in Transatlantic Black Diasporic Art and Community Engagement. She will use this position to work with NSCAD to develop the Institute for the Study of Canadian Slavery.

Darrell Varga has an MFA in Film Production and a PhD in Social and Political Thought from York University in Toronto. From 2005 to 2015 he held the Canada Research Chair (tier II) in Contemporary Film and Media Studies. Varga teaches courses in film history, culture and politics as well as documentary filmmaking. He is a filmmaker and author of numerous books and articles, including: Shooting From the East: Filmmaking on the Canadian Atlantic (McGill-Queen’s University Press, 2015), John Walker’s Passage (University Toronto Press, 2013), Rain/Drizzle/Fog: Film and Television in Atlantic Canada (University of Calgary Press, 2008), and Working on Screen: Representations of the Working Class in Canadian Cinema (University of Toronto Press, 2005).

Jayne Wark holds a PhD in Art History from the University of Toronto and a BFA from NSCAD University. She has published numerous articles and exhibition catalogue essays on performance, video, and conceptual art and is the author of Radical Gestures: Feminist Performance Art in North America (McGill-Queen’s University Press, 2006).