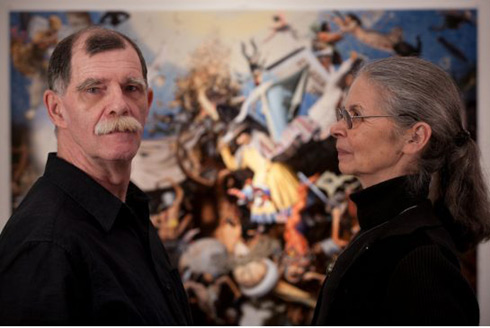 NSCAD’s 2015 Graduation Ceremony is a homecoming for NSCAD alumna Tanya Tagaq. Now as she electrifies stages throughout the world with her music, she’s coming back to the place where she found her voice as an avant garde artist.

“NSCAD changed my life. It’s where I learned to express myself,” says the Polaris Prize and Juno Award winner, who is one of five legendary artists to receive honorary degrees by NSCAD University at the 2015 Graduation Ceremony on May 16. She’ll also give the graduation address to the 2015 graduating class.

Also being recognized for their contributions to art and culture are renowned photographer Robert Frank, activist artists Carole Condé and Karl Beveridge, and designer and art-book publisher Gerhard Steidl.

Tagaq, who graduated with a Bachelor of Fine Art degree in 1998, still dreams of NSCAD, entering the motley collection of historic buildings on Duke Street and “inhaling that old building smell.” “Most of the time I’m trying to get up to the painting studios and it always takes me so long,” she says with a deep, infectious laugh, on the phone from her home in Brandon, Manitoba. “Those buildings hold so many of my memories, so much of my life.”

All the distinguished artists being honored this year have a strong connection to NSCAD. Best known for his 1958 masterwork The Americans, Robert Frank taught a filmmaking class at NSCAD in the 1970s. His work This Film is About…, was filmed at NSCAD in 1972 and 1973, and was recently screened at NSCAD, coinciding with the exhibition, Robert Frank: Books, Films, 1947-2014. That exhibition, organized by Frank’s German publisher Gerhard Steidl, attracted record crowds when it was on display for two weeks at NSCAD’s Anna Leonowens Gallery last September. The line-up for the opening curled around the block.

Steidl, whose dedication and passion to book publishing puts him in a league of his own, says he is “proud and honored” to be invited back to NSCAD. “NSCAD may be a small university but through the quality of its education, it has a strong influence and excellent reputation within the fine art world,” he says.

Like Frank, Carole Condé and Karl Beveridge’s association to NSCAD stretches back to the 1970s, when the art and ideas coming out of the small art college were making heads turn in the direction of Halifax. At the time, Condé and Beveridge could feel the reverberations all the way in New York City, where they were shaking up the establishment by asking pointed questions on the art market, the lack of recognition for women artists and the role of art and culture in society.

Partners in life and art, they’ve been back and forth to the school numerous times since then: making prints with NSCAD’s famed Lithography Workshop in 1973; teaching a summer sculpture course in 1975; and publishing a book, Condé and Beveridge: Class Works, with the NSCAD Press in 2008.

Their exhibition, Scene Otherwise: Recent work by Carole Condé and Karl Beveridge, has arrived in Halifax before they do. The Anna Leonowens Gallery-organized exhibition is on display at the Khyber Centre for the Arts until May 12.

“We’ve always had a natural affinity with NSCAD all the way back to 1969,” says Carole Condé, on the phone from their home in Toronto. “Not only with NSCAD, but NSCAD artists,” adds Karl Beveridge. “That generation of artists was very active.”

Along with the awarding of honorary degrees, NSCAD’s 2015 Graduation Ceremony will include the Installation of NSCAD’s 21st President—Professor Dianne Taylor-Gearing.  The Installation will provide NSCAD’s official welcome to Professor Taylor-Gearing, whose caring, consultative style of leadership is already making a profound impact at the school.

NSCAD’s 2015 Graduation Ceremony takes place Saturday, May 16, 2 pm at the Cunard Centre, 961 Marginal Road, Halifax. The 2015 Graduation Exhibition will be on display from May 5 to 17 at the Anna Leonowens Gallery, 1891 Granville Street, and the Port Loggia Gallery, 1107 Marginal Rd.  Comprising more than 100 artworks, this annual event is the largest display of artworks by NSCAD undergraduate and graduate students.

Following graduation, the NSCAD Alumni Association will host the Grad Dance, taking place May 16 at 8 pm at NSCAD’s Port Campus.