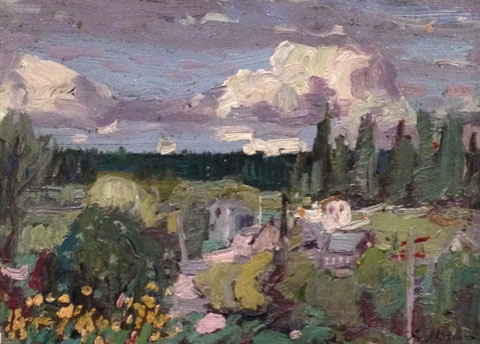 Almost 60 years ago, a teenaged Agnes Evans was art school student by night, art school secretary by day who worked alongside one of Canada’s most prominent and distinguished artists.
Arthur Lismer is best known for being a founding member of the Group of Seven, painters who advocated a new Canadian art that expressed the spirit of the nation through its landscape. But he was also a visionary art educator.

He was the principal of the Victoria School of Art and Design (now NSCAD University) from 1916-1918 and reinvigorated the fledgling school with his energy, enthusiasm and belief that art was for everyone, not for the privileged few. Throughout his 50-year teaching career, he also taught at the Ontario College of Art (now OCAD University), the Art Gallery of Toronto (now the Art Gallery of Ontario) and the Art Association of Montreal (now the Montreal Museum of Fine Arts). It was in Montreal in the late 1950s that Agnes knew the artist, who showed up to teach dressed in a three-piece Harris Tweed suit.

“He was a wonderful person, full of jokes and puns,” said Agnes, recently at the Art Gallery of Nova Scotia to view the exhibition Canadian Pioneers: Tom Thomson, Emily Carr, J.W. Morrice and the Group of Seven, masterworks from the Sobey Collections with a group of seniors for Dee Appleby’s Seniors College class. There are several landscapes and scenes of ships at sea by Lismer dating to his time in Halifax in the exhibition.

“He gave the impression of being lighthearted, but he was serious about his work.”

Agnes, who now lives in Truro, recalled how he’d go off on painting trips to Vancouver Island every summer and come back with dozens of fresh canvases, which he’d prop up around the office so he could look at them and ponder making changes. For Agnes, it was her own private viewing of the latest Arthur Lismer paintings.

She says he had a special touch with children, encouraging them to have fun and express themselves through their art. She remembered one encounter between Lismer and a little boy who wandered into the school, which was then located in an old house on Ontario Street in downtown Montreal.

“’Do you know how to draw a penguin?’ he asked the boy. He was left-handed, and picked up a brush and paper and dashed off this little sketch. He could draw at lightning speed. It was done in two seconds, it seemed, and he tossed it down on my desk.”

Agnes pulled out the little drawing, now framed, from her book bag. The brush-and-ink drawing of two penguins has had pride of place in Agnes’s home wherever she’s lived over the past six decades. “I’ve always loved it,” she says. “He was a born teacher.”