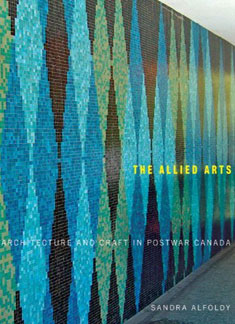 Breathe in. It’s time to smell the roses.
The President’s Reception for Academic Excellence is a chance to recognize friends and colleagues whose accomplishments reflect so well on NSCAD University–to say to one another, ‘well done,’ ‘superb work,’ ‘you rock!’

The inaugural event happens Wednesday, April 18 at 4 p.m. at the Anna Leonowens Gallery. There will be a cocktail reception and display of recent publications by NSCAD faculty. All are welcome to attend this special event hosted by the President’s Office.

Among those being recognized are:

• Sandra Alfoldy, chair of the Division of Historical and Critical Studies, for the publication of The Allied Arts: Architecture and Craft in Postwar Canada;

• Bob Bean, professor in the Media Arts division, for his multi-media exhibition Illuminated Manuscripts, which was displayed at the University of Toronto and the Canadian Cultural Centre in Paris last year;

• Rebecca Hannon, assistant professor in the Foundation program, for selection in the prestigious international exhibition, the Schmuck Jewelry Fair in Munich, Germany;

• Marlene Ivey, assistant professor in the Design division, for An Drochaid (The Bridge) an interactive online social space for Gaelic language renewal and cultural restoration;

• Professor Emeritus Garry Neill Kennedy, for the publication of The Last Art College: Nova Scotia College of Art and Design, 1968-1978;

• Rory Macdonald, assistant professor in the Ceramics department, Craft division, for his solo exhibition, Chalkworks, which was on display at the Mary E. Black Gallery in Halifax in January;

• Bryan Maycock, associate professor in the Foundation program, and Matthew Reichertz, chair, Fine Arts Division, for the Drawing Lab, a SSHRC-funded research project being done in collaboration with Raymond Klein, professor of psychology at Dalhousie University;

• Marylin McKay, professor in the Division of Historical and Critical Studies, for the publication of her book Picturing the Land: Narrating Territories in Canadian Landscape Art, 1500-1950, and the nomination of her book for the Canada Prize in the Humanities;

• Jan Peacock, professor in the Media Arts division, for winning a 2012 Governor General’s Award in Visual and Media Arts;

• Pam Ritchie, professor in the Jewellery and Metalsmithing Department, Craft Division, for adding to her considerable exhibition record in the last year with SOFA in Chicago and New York; Branded in Calgary, Alberta; Jewels from Canada in  Seoul, Korea; and Bagues in Montreal;

• Kye Yeon-Son, professor in the Jewellery and Metalsmithing department, Craft Division, for winning the 2011 Saidye Bronfman Award for excellence in fine craft;

• Jayne Wark, professor in the Division of Historical and Critical Studies, for being part of a team of five curators who prepared the catalogue and exhibition Traffic: Conceptual Art in Canada – 1965-1980, the first national touring exhibition of Canadian conceptual art;

• Susan Wood, associate professor in the Foundation program, for her solo exhibition Earth Skins, which is on tour to four Atlantic galleries;

“We know why NSCAD University is the best visual arts university in Canada … you need only to look at all these names to know why,” says David B. Smith, NSCAD President. “These are faculty members who are not only teaching their students, but taking the time to make art, exhibit, publish, research and win the most prestigious awards offered in the visual arts. As president of NSCAD, I am proud to know them and I pay tribute to their excellence.”