Dennis Page (BDes 1977) loves to send a letter in the mail—not only because of the greetings he’s conveying or the news he’s imparting—but because of the stamp he licks and puts in the right-hand corner.

The Titanic stamp was issued April 5, 2012 on the 100th anniversary of its first and last voyage.

Not just any stamp mind you, but a stamp of the Titanic, appearing as she was meant to be seen, proud and majestic, as she sailed during the calm sunset hours of her last night. His company Dennis Page Branding and Design was commissioned by Canada Post to design the international stamp for issue in 2012, marking the 100th anniversary of that fateful trip.

“It’s always a thrill to send something through the mail these days,” says the Halifax-based designer, who has a framed souvenir poster of the stamp hanging over his desk.

To create the stamp—actually five in total—Dennis enlisted help from his team: designer Oliver Hill (BDes 1994); illustrator Mike Little; and Danielle Trottier, manager of design and production at Canada Post. They also worked closely with Dan Conlin, a Titanic expert and curator at the Maritime Museum of the Atlantic.

“We knew it had to be perfect. When you’re doing something historical, you’d better be bloody accurate,” says Dennis with a laugh. “And even more so when you’re representing Titanic.”

The main stamp shows a side view of Titanic as she sails, smoke billowing from three of its four stacks. A map of the Atlantic Ocean disappears into the sky, with Halifax (where 209 of the recovered bodies were brought after the disaster), Cape Race (where a wireless station was located) and Southampton (home port of the White Star line) represented as stars. Mike Little’s full colour illustration is based on the most accurate contemporary drawings ever produced of the so-called “unsinkable ship.” 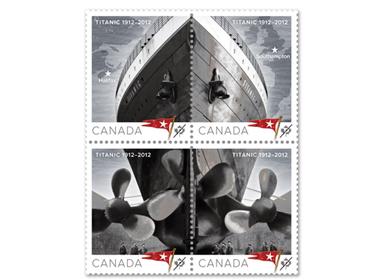 The illustrations of the bow and stern of Titanic were based on photographs of the Titanic and its sister ship the Olympic.

The second image of Titanic is comprised of a set of four stamps, which shows the ship’s bow above and below the water. “It was the biggest manmade moving object on Earth—I wanted to convey that feeling, the awe you would have experienced looking at her,” explains Dennis.

A proud NSCAD design grad, Dennis is now at the head of his third company. He and partner Eric Wood (BDes 1980) were the talents behind Page and Wood, which ran from 1988 to 2005 and then morphed into Trampoline, a full-service advertising, marketing and interactive agency. Dennis stepped back from the business in 2006 to take a breather and work on his golf game.

But he loves design and was lured out of retirement to take on projects he enjoys. Under the shingle Dennis Page Branding and Design, he has designed 10 stamps to date, as well as taking on several identity and branding projects.

“For me design is problem solving, it’s a strategic process that you work on with a client,” explains Dennis. Some of his favorite projects over the years include—as he says— “putting the baker back into Ben’s Bakery”; establishing Crossley Carpet Mills of Truro as a home style leader; leading the branding for the Port of Halifax and Halifax Seaport; and devising the name, branding and visual identity for Avondale Sky, a new winery in Newport Landing.

“As a designer, I consider it my job is to get to the bottom of a problem and find a resolution. I really love that challenge.” 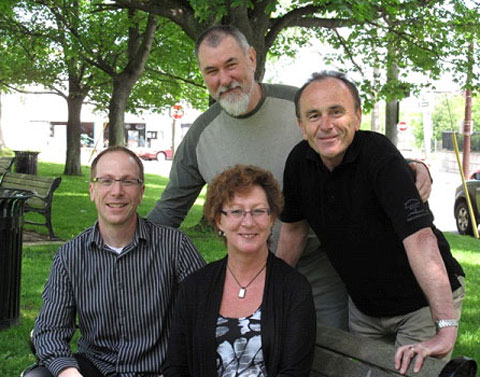