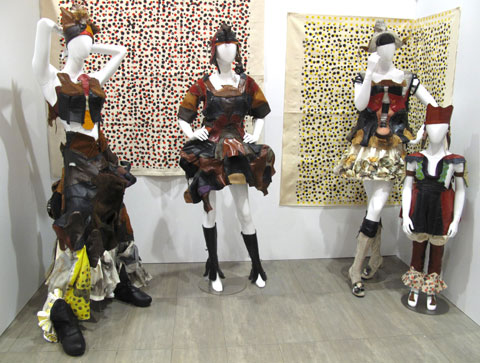 Pretty, fashionable, mainstream. These are not the kind of adjectives usually applied to Arianne Pollet-Brannen’s work.

So, when she was invited to exhibit at Fashion Art Toronto’s (FAT) Arts & Fashion Week, the 2009 NSCAD grad known for her sculptural artwear created with used leather shoes was a little confused.

But she took a leap and it ended up being a great venue for her work. “There were a lot of very off the wall projects and people who kind of have the same notion of body decoration as myself,” said Arianne. “Being a part of such an event helped me to understand fashion better.”

Unconventional to say the least, Arianne Pollet-Brannen was one of 10 artists whose work was showcased throughout Arts & Fashion Week, April 22-26.

Arianne uses each piece of the shoe to create her sculptural artwear. Not keen to use thrift store shoes for fear of “taking shoes away from someone else,” Arianne prefers to have shoes given to her because people are emotional about shoes and they often come with a story.

Reflecting on her experience at Arts & Fashion Week she said, “It’s just nice when you’re in that environment; you meet a lot of people who have a background in fashion but also in art so people are a lot braver with what they put forward today. They deal with political aspects, sexual aspects and feminist aspects but they look at it from so many different directions.”
The artists, “They really celebrate the body, which is so great, because when I go to my studio I’m really about celebrating the body. I like to transform things from two dimensional to three dimensional.”

Arianne connects her experience at Arts and Fashion Week with her time spent at NSCAD. Making mention of Dr. Jayne Wark’s “Dress, body, culture” class and how it taught her that fashion comes from designers looking at street style and not the other way around.

“Style comes from the individuals,” said Arianne. “So it was interesting to be there [Arts and Fashion Week] and to see that actually in the flesh. People wearing things that were over the top, unrelated to anything you’d see on the racks and totally their own style.”

Arianne also gave credit to part-time NSCAD faculty member Toshiko Horiuchi MacAdam for her “Fibre, fabric, fashion” class. “She [Horiuchi MacAdam] gave me so many tips that I constantly use when I work,” she said.

Constantly looking ahead, Arianne already has visions for the 2015 Arts & Fashion Week.

“Next year I want to be on that runway show. I want to do the whole spectacle because that’s really what I wanted to do. This year I had to get the feel of the land. There were a lot of people there who really treated fashion more as sculpture. They had video work, which I am also interested in doing and a musical part as well.  I would really like to put that whole mixture together and go there again.”

Most recently, Arianne has received donations of leather purses and jackets so she’s anxious to see where that will take her. “I’ve done all of this stuff in Toronto and I have to get back into my studio, reassess and see if I can get that same vibe from other leather items that I do from shoes.”

Ainslie Ross is a graduating student in NSCC’s Public Relations Program who is completing an internship at NSCAD University.