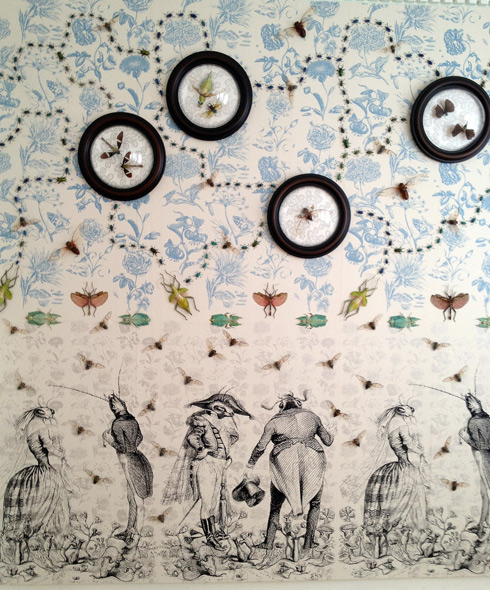 Jennifer Angus (BFA 1984) is always delighted that the first reaction to her work is “Ewww!”
Since 1999, the NSCAD alumna has carved out a niche for herself as “the bug lady,” creating mesmerizing and intricate patterns using insects in site-specific installations. Not the beautiful kind of insects, like dragonflies and butterflies, but the repulsive ones, such as weevils, cicadas, grasshoppers and all sorts of uglies from the leaf mimic family.

With more than 30,000 insects in her inventory, she herself has long gotten over the ick factor. She relies on seeing it in other people to tell her her work still has the power to surprise and fascinate.

“I remember I was working on something at the kitchen table and had cleared everything away for dinner. My son sat down and picked up a stray leg from the table cloth, informing me ‘you do know this is really gross don’t you?’” Jennifer laughs at the memory, on the phone from the University of Wisconsin, Madison where she teaches in Design Studies Department. “I feel it takes a lot to wow people at this time when everyone has all this information at our fingertips. So when I see the reaction to my work—when people say ‘yack!’ and literally step back—I know it’s working.”

The artist is now preparing for the most prestigious exhibition of her career. Her work will be showcased in the inaugural show of the re-opened Renwick Gallery at the Smithsonian American Art Museum in Washington this fall.

Jennifer came to NSCAD in the 1980s to pursue her passion for pattern and textiles. She loved the atmosphere, with its rabbit-warren campus, close-knit community of engaged artists and the Anna Leonowens Gallery which gives students a venue to show their work. Her professors were first-rate too: “I felt prepared technically and conceptually to go on to graduate school,” she says.

And she credits a conversation with a fellow NSCAD grad—and a misunderstanding—for getting her on her current path. At the time, she had already decided she wanted to create patterns using insects in some way and was talking about it with Sarah Quinton (BFA 1982), now the curatorial director at the Textile Museum of Canada. (In 2005, Sarah curated Jennifer’s A Terrible Beauty at the Textile Museum of Canada.)

But Sarah misinterpreted what she said. “I was thinking to do something with the pattern on the insects but she thought I said making patterns out of the insects. My mind went immediately to repeat patterns using the legs and wings.

“In school we are always asked to justify why we were doing something … but for me it was purely a gut feeling. I need to put insects on the wall in patterns.

“As I was installing my first show (on Queen Street in Toronto), I could hear people saying ‘I don’t see any art! It’s just wallpaper.’ I love to lull people into thinking it’s one thing and then it’s completely another.”