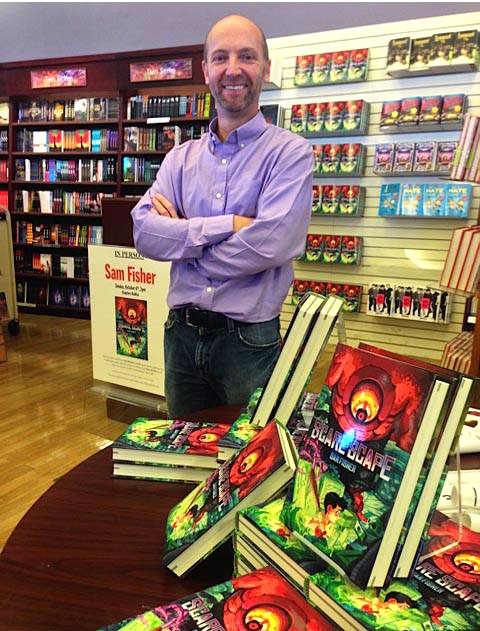 Film professor Sam Fisher figures he’s got 15 years of writing projects stacked in his head and he’s happy that at least one of them made its getaway.

Scare Scape, a novel of mystery and monsters for kids ages 8 to 12, is now on book store shelves. Published by Scholastic Press, it’s not only Prof. Fisher’s first novel, but the first novel of a trilogy. The second novel, with the working title The Lost Library, will soon be on its way to his editor in New York.

“I teach screenwriting here at NSCAD and, while on my sabbatical, I decided to take a kick at writing a novel,,” says Prof. Fisher.

Scare Scape is the story of three kids who move into an old house in a new town. While exploring, they find a gargoyle buried in the garden, and unearthing it unleashes strange magic. Scare Scape is also the name of one of the kids’ favorite comic books , whose author used to live in their house and whose monsters—electric killer eels, four-headed snakes and the Greater Spotted Wargle (rhymes with Gargle) Snarf–have now come to life. The novel recently got the Junior Library Guild’s seal of approval.

“The kids have to try to figure out where the magic came from and how to put their lives back in order,” explains Prof. Fisher, the father of three kids.

The germ of the idea for the book series came when his boys, now 19 and 20, were preschoolers. He remembers his outrage after finding out that they were shown the film Men in Black, featuring  gun-toting, wise-cracking secret agents, at their daycare. His boys loved it.

And that’s when he noticed there wasn’t a lot of action-oriented entertainment for kids that wasn’t gun centric. If he created his own entertainment for kids who crave action and adventure, he’d use monsters, he decided. Monsters serve as metaphors for the challenges and fears in kids’ lives, but don’t carry the subtext that guns and violence are cool.

“Children are always going to be afraid of getting lost in the woods, witches or scary strangers—that’s the stuff of Grimm’s Fairytales,” he says, citing Bruno Bettelheim, a child psychologist who believed traditional tales considered too dark for children were actually comforting for them.“Stories like those reassure children’s fears—they don’t create them—because the children in the stories always overcome.”

So, why write a book and not a screenplay.

“I didn’t want to worry about a budget the way you have to with film,” he says. “With a book, the special effects are in the reader’s own brain, and as a writer, you have an unlimited palette. It’s much more creatively liberating than making a film because you are 100 per cent in control and there’s much less compromise.”