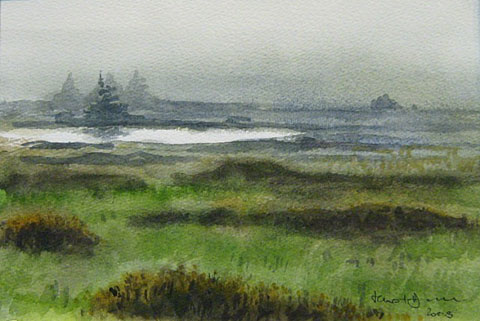 Horst Deppe was well known as a graphic designer and much beloved professor of design at NSCAD University. He was less known as a fine artist.
Secord Gallery will shine a light on the late professor’s other side with a commemorative exhibition which opens Friday, Feb. 15 at 7 p.m.

“I feel he was always underestimated as an artist,” says Renate Deppe, his wife of 54 years. “He was very serious about his art. He was also extremely knowledgeable about art history and history in general.”

Horst and Renate lived on Nova Scotia’s rocky coast near Herring Cove, where foggy mornings were common. Rendered in soft shades of grey, his misty watercolour landscape paintings reflect his fascination with the bogs and coastal regions of Nova Scotia and Newfoundland. He also loved the wintry landscapes of Europe’s northern countries, adds Renate.

“Each button had to be perfect. Every detail was meticulously researched,” says Renate.

The exhibition will continue to March 8. Secord Gallery is located upstairs at 6301 Quinpool Road, Halifax.