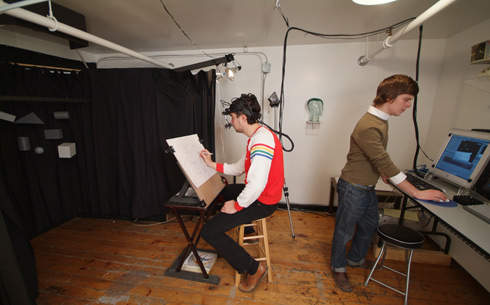 Art and science meet in the drawing lab

If you’ve ever taken a drawing class at NSCAD University or elsewhere, you may recall the instructor telling you to squint while looking at the scene in front of you—the theory being that squinting takes away some of the details and colour information and allows you to see values and shapes more easily.
That’s the thinking, but is it true? And if so, why?  Those are some of the questions that the NSCAD University Drawing Lab has endeavoured to answer through its research.

The lab was officially launched in 2005 with funding by the Social Sciences and Humanities Research Council (SSHRC). Now in its third home—NSCAD’s Academy Building—and on its second SSHRC grant—$157,000 for three years— the lab seeks a better understanding of the artistic process through the application of scientific methods.

The subjects for exploration have arisen out of teaching drawing classes at NSCAD and a questioning of why common practises used by drawing instructors seem to work in terms of getting students to be better at drawing. Like the tip about squinting, for example, or the exercise of drawing a scene illuminated by a strong light from one side instead of a diffuse light from overhead.

“We do these things but why? What’s the evidence?” says Prof. Reichertz, chair of the Fine Arts Division at NSCAD. “That’s what this lab endeavours to find out.”

One of its first studies was to analyze how experienced artists drew as compared to foundation-level students. One of its conclusions—research is still ongoing using the wealth of data gathered—is that students quickly improved at drawing with practice; like the experienced artists, they began to look at what they were drawing more and less at their drawing. In September, the lab will begin work on a new, more open-ended study about the possible benefits of using digital drawing tablets to teach drawing. The lab also hopes to engage master’s students in conducting research.

“We are people who work well together,” says Dr. Klein, professor of psychology at Dalhousie University and a cognitive psychologist, about the NSCAD-Dalhousie collaboration. “The key for us is in being open minded and allowing ourselves to be exposed to different ways of thinking.”