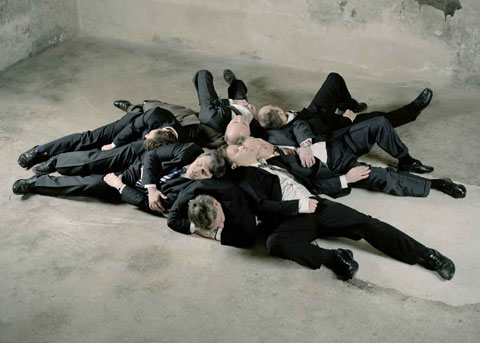 NSCAD University welcomes artist and filmmaker Oliver Ressler from Vienna, Austria for the first public lecture of 2014.
Mr. Ressler produces installations, projects in the public sphere and films on the implications of the global financial and economic crisis, as well as on the underlying flaws in the model of parliamentary democracy as revealed by the economic crisis.

Mr. Ressler will present the lecture “Spatial Occupations” on Thursday, Feb. 27 at 6:30 p.m. in the Bell Auditorium, Granville Campus. A reception will follow in the NSCAD student lounge.

Notable works include the video installation What is Democracy (2009), the wall texts Elections are a Con (2011) and Too Big to Fail (2011), films The Bull Laid Bear (2012) and Robbery (2012), and the photographic series depicting “piles of managers, police officers and soldiers” in We Have a Situation Here (2011). The three-channel video installation Take The Square (2012), is based on conversations he initiated and filmed among activists of the occupy movements in Madrid, Athens and New York. This major work focuses on organizing, horizontal decision-making in assemblies and the tactic of occupying public spaces. Ressler’s most recent film, In the Red (2014, co-directed by Ana Pečar) is about the debt resistance movement that arose out of Occupy Wall Street in New York City. He is the editor of Alternative Economics, Alternative Societies (2007) and  co-editor with Greg Sholette of It’s the Economy, Stupid. The Global Financial Crisis in Art and Theory (2013) which brings together internationally acclaimed artists and intellectuals, including Slavoj Zizek, David Graeber, Judith Butler and Brian Holmes, to focus on the current economic crisis in a sustained and critical manner.

“Oliver Ressler’s practice as an artist/activist resonates with what many younger artists are exploring in their life and work; not satisfied with the status quo and conventional methods of meaning making, they are making efforts to provide their art with some social use value,” says Dr. Bruce Barber, Chair of the Media Arts Division. “There are plenty of issues worthy of their attention, some right here in our own community. The films and installations of Oliver Ressler provide some exemplary models of art activism which are not only visually and intellectually challenging but also entertaining.”

The next guest for NSCAD’s Public Lecture Series is Brooklyn artist Spencer Finch, best known for his ethereal light installations. His lecture will take place Friday, April 4 in the Bell Auditorium.