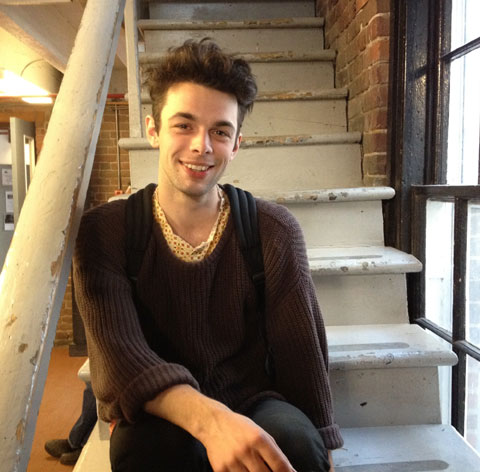 It doesn’t look like Ben Stephenson will end up a jeweler or a sculptor or pursue any of the disciplines he explored while at NSCAD. But he found his creative path within the labyrinthine walls of the art college in any case, and, with his debut novel now on bookstore shelves, credits his NSCAD education for helping make it possible.

“So much of what I learned at art school I continue to reflect on,” says Ben (BFA 2010), who majored in fine art, with a minor in drawing. He’s also quite proud of being the founder of the Microgallery, literally a hole-in-the-wall gallery for tiny art exhibits located on the way up the stairs near the Textiles department.

“Things like the motivation to make art and the honesty you need to approach it, those are the kinds of things I’m talking about. Being at NSCAD helped me to discover the values that I appreciate so much.”

He adds: “I’m someone who makes art but it’s in a different medium. I always felt that the art I was doing was not that great. But my writing—and I’m not going to say it’s great either—but people say it is and want to publish it.”

His book is called A Matter of Life and Death or Something and is published by Douglas & McIntyre, one of Canada’s largest independent publishing houses. Its release heralds the arrival of a truly original voice.

Ostensibly, the book is about a 10-year-old know-it-all by the name of Arthur and his solitary adventures in the woods behind his house. But when Arthur discovers a weather-beaten notebook in the underbrush, he finds maybe he doesn’t know as much as he thought he did. Who, for one, is Phil, the notebook’s author? Why is Phil so very sad? And why do Phil’s notebook entries end so suddenly and dramatically on page 43?

A Matter of Life and Death or Something is a three-in-one story, with the reader getting to know the precocious Arthur, the despondent Phil, and the woods, a personified vital force throughout the novel.

From Saint John, N.B., Ben says he was captivated by the character of Arthur and interested in the things he has to deal with at such a young age. “He’s very meticulous about things and very imaginative,” says Ben, who lives in Halifax. “One of the things he’s already dealing with is the mystery of where he came from. And then he finds this notebook and he starts to reflect on one of the most adult things anyone can deal with—death.

“As someone who is part of the generation who grew up on self-esteem pills—you know, constantly being told ‘you’re special’ and ‘you can do anything’—I was interested in a kid who actually has to deal with some pretty heavy issues and figure them out for himself.”

A Matter of Life and Death or Something took shape during Ben’s last semester at NSCAD. With ideas swirling around in his head, Ben says he wanted to use words as his medium. And so, with the blessing of advisor Michael Fernandes, he started writing in earnest.

“It was so cool to be around different artists,” he says with a laugh. “They’d be making these huge messes and here I was, sitting at my little table, just thinking a lot of the time.”

There will be a launch party for A Matter of Life and Death or Something in the Khyber Ballroom, 1588 Barrington St., Halifax, on Saturday, April 7, 7:30 p.m. There will be musical performance by Robert Loveless and Muncho Joe and readings by Ben Stephenson, Andrew Patterson and Josh Salter.