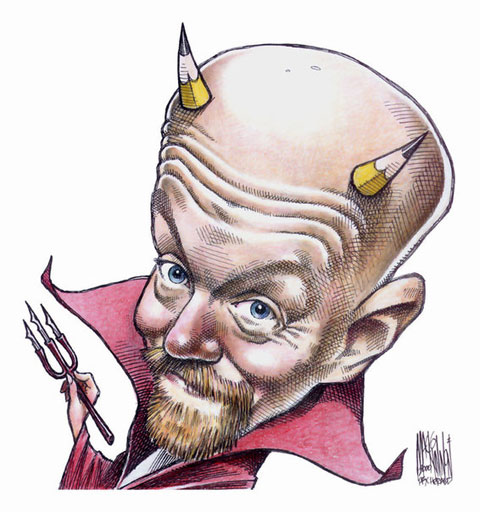 Bringing you your morning smile

For Bruce MacKinnon finding the right university was a little like Goldilocks entering the house of the three bears. None of them was quite right.

He had already been out west for a year working in the oil patch and attended two other maritime universities before enrolling in the design program at NSCAD.

“I was practically minded and that’s why I went to NSCAD for graphic design,” says Bruce, 51, the long-time editorial cartoonist at the Halifax Chronicle-Herald. “There are some basic design lessons that I think back on even now.”

But being practical, the native of Antigonish didn’t stay long at NSCAD either. With a young family to support (daughter Robyn is a NSCAD grad too) he started doing editorial cartoons for the Herald in 1986, filling the void left by renowned cartoonist Bob Chambers. He’s since been there for 26 years—giving newspaper readers something to smile and think about when they open their morning paper.

He makes it look easy, but it’s a tough job to present your opinion in an entertaining way. Then to draw it, refine it and finally add color – and have it in by a late afternoon deadline. The next day, he’s facing a white sheet of paper all over again.

“I love my job and I always have,” says Bruce, who informs that he’s crosshatching while talking. He uses a quill pen dipped in ink to draw with, then paints with watercolors. “The older I get, the more I seem to go back to those traditional techniques. I think I come from the Middle Ages.”

These days he’s also been doing large scale acrylic paintings: Caricatures of a famous Canadians such as Joni Mitchell, Oscar Petersen, David Cronenburg, Bruce Cockburn and David Suzuki. Some are assignments for Herald Magazine, a new quarterly published by the Herald. Bruce hopes to complete enough to eventually present them in an exhibit.

“With the cartoons, you do what you do in a day, but with the paintings I try to make them more lifelike and dramatic,” says Bruce, named to the Order of Nova Scotia last year. “I feel like I’ve been able to take my work up a level.”