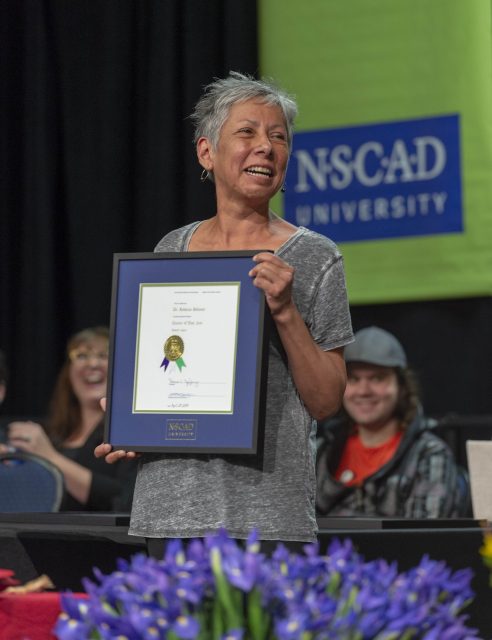 NSCAD’s Honorary Degree Committee is charged with selecting individuals, for conferral of the degree of Doctor of Fine Arts (honoris causa) and the new appointment of Life Fellow. To this end, the committee seeks nominations for individuals from the NSCAD communit.

By awarding honorary degrees, NSCAD University seeks to recognize extraordinary achievement, in Canada or abroad, in community, national or international involvement, and to honour those individuals whose accomplishments are of such generally perceived excellence that they provide, through example, inspiration and leadership to the graduates of the University. Their esteem should be such that, by virtue of accepting an honorary degree, their presence will bring honour and distinction to NSCAD University.

Extraordinary achievement worthy of an honorary doctoral degree is excellence or achievement in creating something important and new – new knowledge, a new value, a new perspective, a new capability, a new appreciation, a new event or a new object.

The committee defines as broad a range of categories for achievement as possible in obtaining and considering nominations. In determining the leaders and exemplars to honour, it will seek over time to achieve a balance across disciplines and backgrounds. The committee also considers the association nominees may have with NSCAD University or with higher education more broadly. The committee also attempts to reflect the national character of Canada, the desirable features of its regional and cultural diversity, and the character and diversity of the university itself. As such, it is necessary for the committee to have a diverse pool of candidates so that it may consider diversity in all of its dimensions.

The role of the committee is to review and select outstanding candidates for honorary degrees across a range of academic disciplines and non‐ academic areas of achievement. The committee will seek nominations of candidates who have demonstrated:

Nominators should ensure that their nomination letter and supporting materials provide reasons for the nomination that are as complete as possible.

They should cite the pre‐eminence of the individual nominee in their respective field, and/or achievements and accomplishments of an outstanding nature. If submitting multiple nominations, they are encouraged to provide a ranking for those nominations. This will both assist the committee in their deliberations and may reduce the amount of supplementary information requested by the committee. It is important to note that submissions will be accepted at any time during the year, though only those received by the annual deadline will be considered for that year’s nomination cycle. Nominations may be submitted at any time to the Office of University Relations attention Chris McFarlane. All nominees must meet the ethical standards of the university, have no conflicts of interest, and subscribe to the standards of Equity, Diversity and Inclusion.Life Fellow

By appointing an individual as a Life Fellow, NSCAD University seeks to recognize former faculty, staff, alumni and other individuals who have made significant, long term contributions to the life and development of the university. The recognition is seen as an appropriate way in which to honour persons who might not be nominated for an Honorary Degree.

The following persons are not eligible for consideration for appointment as a Life Fellow: current members of the faculty, staff, the Board of Governors, or their immediate families; current students; individuals who are active in any level of Canadian political life, although exceptions may be made for Governors General or Lieutenant‐Governors, judges and others whose appointments place them outside active partisan politics.

Nominators should ensure that their nomination letter and supporting materials provide reasons for the nomination and are as complete as possible. They should cite the significant, long term contributions to the life and development of the university by the nominee.

To assure the confidentiality of the process, nominators shall keep the nomination confidential from the nominee. Do not initiate a letter‐writing campaign to support nomination; doing so will not influence the outcome.

Please send all nomination documentation in electronic format to: