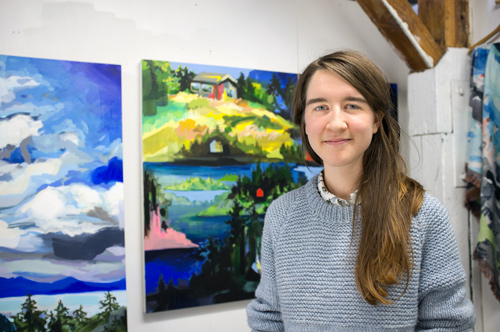 NSCAD masters student Liz Toohey-Wiese travelled across the North American continent to realize she couldn’t leave her landscape behind.
Moving from the west coast to the east, she thought she’d be attracted to Nova Scotia’s landscapes—something new to paint—but the rocky coastline, charming south-shore architecture and rolling Annapolis Valley countryside didn’t speak to her. Instead, she continues to paint the coastal mountains, fjords, inlets and hot springs of British Columbia.

“When I moved away, I began to understand my relationship to place for my sense of self,” says the Langley, B.C. native who did her undergraduate degree at Emily Carr University of Art and Design in Vancouver. “It’s so different here, so I started creating works that were imaginings of real places; they exist but in my own memory.”

Her attachment to place got her thinking of other landscape painters, and what they are drawn to and affected by. “I discovered my identity is wrapped up in the place I grew up in.”

Of course, any discussion of landscape painting has to include the Group of Seven, so intrinsically linked to Canada’s identity and Canadians’ romantic ideas about wilderness and northernness. But growing up on the West Coast, Liz felt those artists were fundamentally unknown to her; “for us, it’s all about Emily Carr.”

And how, anyway, to move beyond the Group of Seven and Emily Carr? What is contemporary art’s role in mediating ideas of landscape, place, nation, environment, nature, even race relations? “Discussion of landscape sparks all these complicated dialogues; it’s rich territory.”

As part of her exploration, she will be teaching a third-year class in the Winter 2015 semester. Politics and Landscape (ARTS 3146) is the first class for undergraduates she’s taught. An interdisciplinary elective, students will gain an understanding of how landscape-based art has culminated through the decades into the present moment of contemporary landscape art through films, readings, class discussion and lectures. They’ll be asked to think critically about landscape when creating their own works.

She is also working on her thesis exhibition, scheduled to be displayed at the Anna Leonowens Gallery in March. The title, There There, “references this idea of inhabiting multiple places at once.”

Attracted to do her master’s degree at NSCAD University because of its historical reputation for quality and the recommendations of several professors at Emily Carr, she says NSCAD has lived up to its promise, providing her with mentorship and support to gain teaching experience, even to design her own course.

Her studies at NSCAD are supported by a Joseph Beuys scholarship, Elizabeth Greenshields Foundation grant and a BC Arts Council Grant. She’s also worked as a teaching assistant for an art history, an advanced painting class, and in the summer, on the Parks Canada-Keji class led by Anna Sprague.

“It was an important experience, we all felt inspired by it,” says Liz of the summer class which led to an exhibition Alternative Means: An Aesthetic Field Guide to Kejimkujik National Park at the Anna Leonowens Gallery in November.  “NSCAD has so much to offer, and I’m not sure if students realize it … things like 24-hour access and studio space, even in second year.”