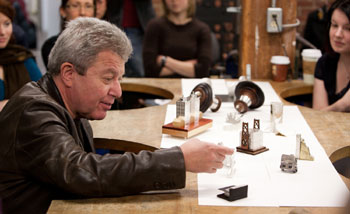 Daniel Libeskind’s recent visit to NSCAD included the presentation of a unique joint project between the internationally renowned architect and third-year jewellery and metalsmithing students.

In conjunction with his February 10 Public Lecture Series speaking engagement, Daniel Libeskind kindly consented to help design an Advanced Jewellery Techniques class project. In the weeks leading up to the critique, students of Professor Tom Ferrero – himself an accomplished metalsmith artist – spent long hours creating an intriguing series of salt and pepper shakers, based on the concept of “cities.”

Why salt and pepper shakers? For Mr. Libeskind, “Just because an object is small doesn’t make it any less significant. After all, it’s the small but important objects that generate ideas,  that pose the question, ‘What is an object?'”

One by one, each of the 12 students presented their ideas, in the form of finished products, for a generous, thoughtful critique by one of the world’s leading architects.

And Libeskind’s reaction? “We need you in architecture!” Calling NSCAD “a fantastic place,” he emphasized how impressed he was with the quality of everyone’s work – even declaring several pieces to be “tours de force.” “The level of these pieces, the ambition, the skillfullness…such great work.”

“I’m amazed at how such small objects could generate such a sophisticated level of discourse,” Libeskind added.

“Students develop their creative skills more intensely when pushed out of their comfort zone,” said Pamela Ritchie, Professor of Jewellery Design and Metalsmithing.  “Someone of Daniel Liebskind’s stature not only inspired but challenged them to consider their work from alternative points of view.”

“Libeskind has taught at more than 30 universities and his ideas have influenced generations of those interested in the development of culture, architectural practice and urban design” added Dr. Christine Holzer-Hunt, Dean of Undergraduate Studies

“Daniel Libeskind’s global stature combined with his creativity and artistic vision positioned him perfectly to work with students in NSCAD University’s flagship Jewellery and Metalsmithing program.”