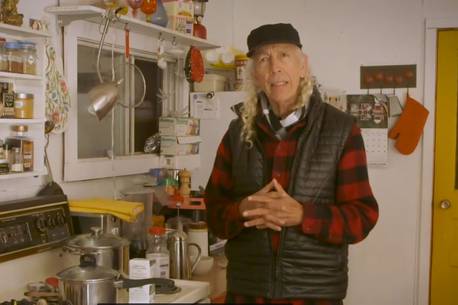 NSCAD faculty member Michael Fernandes has been honoured with one of Canada’s highest distinctions for achievement in visual and media arts.
On February 13, 2020, Fernandes was named a recipient of the Governor General’s Award in Visual and Media Arts in recognition of his outstanding career. The Canada Council for the Arts awarded the prize to eight nominees from across the country for their contributions to Canadian creativity.

“I am surprised and honoured to be included in this special celebration,” said Fernandes. “I credit every NSCAD student I have had and all my colleagues and friends for helping me grow along the way. I share this award with them all.”

Fernandes’ work uses familiar and commonplace materials to ask the viewer to confront the boundary between daily life and art, while relying on concepts like “us and them” to provoke a self-recognition on the part of the viewer. Originally a painter, Fernandes later focused on installation and multimedia to create situations that inspire participation and awareness from the viewer.

“We’re absolutely thrilled for Michael and want to congratulate him on receiving this deserved recognition,” said Dr. Ann-Barbara Graff, Vice-President (Academic & Research), NSCAD University. “Michael has been a valued faculty member at NSCAD for more than 40 years. His impact on Canadian art is measured not only by his work, but by the work he has inspired in the countless young artists he taught and mentored.”

Born in Trinidad, Fernandes moved to Canada to study at the Montreal Museum of Fine Arts in the 1960s. He began instructing at NSCAD in 1973, while continuing to exhibit professionally across Canada and internationally. He has headlined exhibitions at galleries internationally, including the National Gallery of Canada, the Museum of Modern Art in New York City, the Massachusetts Museum of Contemporary Art, the Art Gallery of Nova Scotia, and the Context of Art Biennale in Warsaw, Poland. His work has also been included in ‘Traffic: Conceptual Art in Canada 1965-1980,’ the nationally touring exhibition.

His exhibitions are highly regarded as conceptually sophisticated and aesthetically uncompromising, while his interdisciplinary projects engage a dialogue between art, contemporary politics, the environment, the body, identity and community.

Throughout his highly successful career, Fernandes has remained a constant source of expertise and creativity for students at NSCAD. He is dedicated to a student-focused model of art education that encourages students to find success in the things they love to do.

“To have faculty with the knowledge and experience of Michael is a significant asset for our students,” added Dr. Graff.

This marks the 10th time a Governor General’s Award in Visual and Media Arts has been given to an artist with a direct connection to NSCAD, whether it be a faculty member or alumni. Other NSCAD community winners of the award include Landon Mackenzie, Jan Peacock, Rita McKeough, John S. Green, Eric Cameron, Garry N. Kennedy, Micah Lexier, Sandra Meigs and Wanda D. MacGillivray.

The Governor General’s Awards in Visual and Media Arts were created in 1999 by the Canada Council for the Arts and the Governor General of Canada. They celebrate Canada’s vibrant arts community and recognized remarkable careers in the visual and media arts.