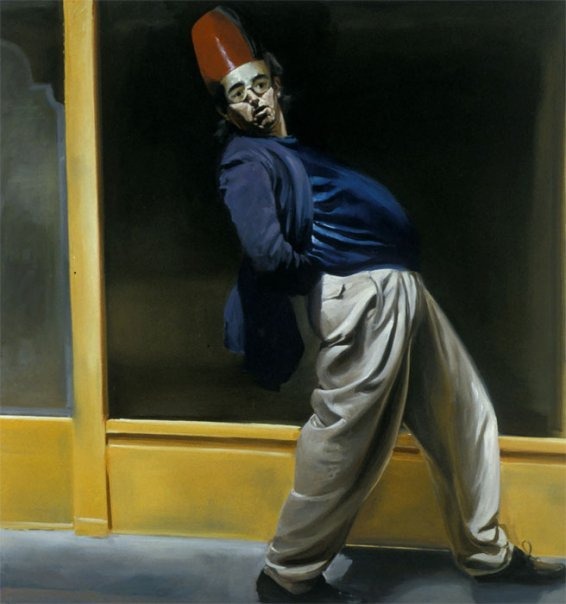 It is a pleasure and an honor to be here today. I want to thank the Board of Governors, The Academic Honors Committee and the College Community for having selected me to be this year’s doctoral honoree.

What started out as flattering has become a momentous occasion for me.  As I started to organize my thoughts about what I would say today, I could see that the trajectory of my life, my career and my achievements all have a direct relationship to NSCAD.

As you may know I taught here during the mid-seventies.  I don’t think I was much of a teacher but I was diligent.  I was too young and too undeveloped in my own work.  I could only offer my students what I had been taught, little of which seemed to apply to what was evolving in my work.  I came here an abstract painter and left painting narrative scenes of suburban dysfunction.  Nonetheless, I tried to instill a sense of high purpose and enthusiasm in my students with regards to painting.

So many extraordinary and important things happened to me while I was here.  Extraordinary because at the time I could never have dreamed of where I would end up and important because, looking back, I see the deep solid base my time in Halifax gave me.

I have been very fortunate, very lucky and very blessed.  All along the way I have been helped by people who have believed in me, often at times when I didn’t believe in myself. It was a former teacher of mine from Cal Arts, Alan Hacklin, who managed to talk Pat Kelly and Gerry Ferguson into hiring me to teach painting.  Two years out of school and about as green and confused as anyone could be, I was hired to fill a vacancy in painting that had suddenly occurred.  Imagine teaching painting at the pre-eminent conceptual art school for that time.  It was, to say the least, an oxymoron.  But it was probably their indifference to painting that got me the job.  At the time it was to be for a semester.  I remember the call.  Alan said he may have convinced them to hire me and that I should take the job.  He said it would be better than anything I was doing at the time and though they didn’t have much use for painting, it was a prestigious school and good things could come out of my association with it.  Take the job, he said.  He was right.  NSCAD had no use for painting and it did lead to other things.  I stayed four years.  I have Gerry Ferguson to thank for much of that.  Though Gerry disagreed with pretty much everything I thought about art, he was a staunch supporter.  His intellect and high standards for both art and art education were a force field of energy and friction that was so powerful and enervating I had to precisely hone my thoughts and my work as a form of self-preservation.  Gerry, along with Gary Kennedy and Pat Kelly, comprised the core and the vision of this institution.  I have to give them credit.  They made it into what had been described as the “best art school in North America”.  When I wasn’t completely exasperated by their collective pig-headedness about what art was and how it should be taught, I was extremely proud of being a part of it.

I met so many artists and curators here.  Some took an interest in my work.  David True, who was a visiting artist, recommended me to his dealer in NY which is where I had my first NY show.  Allan Mckay put two of my paintings in a huge and controversial show called Canada Canvas. That was the first show I had ever been in.

Bruce Ferguson, whom I met at the opening of that show in Montreal, is someone I owe a great deal to.  He was the new director of the art gallery at Dalhousie University and he gave me my first one person show.

He has been a dear friend and an absolute advocate for my work.  No one has written more exhaustively, and exhaustingly, about my work or curated more of it.  His reflections on my painting has enhanced and expanded my own understanding of what I do.  He is here today and I would like to take this opportunity to thank him and also to ask for a moment of silence so that we can finally and officially bury the memory of the time he hung my painting upside down.

April Gornik and I met here.  She graduated from NSCAD in 1976 and she is one of this college’s most successful students.  Her work is in major museums and collections throughout North America.  It was here, in Halifax, on Barrington St. that she made her first landscape paintings, which is the signature of her oeuvre.  In 1978, it was on the strength of her conviction that our destinies lay in New York City that convinced me we should move there and pursue both our careers and our relationship.  We talk about art all the time.  She is usually the first one I show my most recent work to and certainly the first one I turn to when I am lost in it. She knows what I do and she knows when I am doing it well.

Why am I telling you all this?

I guess what I am trying to say is you don’t do it alone.  NSCAD is a nodal point in my life as an artist.  Great things have happened to me.  Great things have come to me. And I have worked very hard to make art that warranted the respect and admiration and help I have received.  Getting this degree tells me I have gained that respect and I am deeply honored.

So now what can I give you as advice to go along with my blessings?

I asked my assistant who has been out of art school for five years if she remembered anything her graduate speaker said.  She couldn’t remember who the speaker was.  She said no one remembers because you can’t say what it is really like out in the world, how most of you will stop making art and the rest will have shitty jobs and squeeze art out whenever you can.  She said I should tell you that you would be happier if you didn’t make art so you could go home at night and take a shower and chill.  She said not everyone needs an outlet anyway.  And those that do know they need it and nothing will stop them.

And that is from some one who has a job and a studio in NYC, is making art, and is happy!  I’m not going to tell them that, I said.  I’m going to tell them this.  You are at the very entrance to this journey (maybe it is more of a starting line at a land grab and when I finish speaking, you will stampede out of there to get what space is left.  Maybe some of you have already cheated the start and have some stuff going on?  I don’t know.)

At any rate, what I want you to know is that you are going to make this journey alone but among friends.  Cherish that irony.  Realize that until you make your mark, the artworld proceeds happily without you.  After you have made your mark, the artworld has been changed forever.  Until you make a difference you do not make a difference.  So strive to do so.  Be ambitious.  Ambition is a sign that you respect your Muse.  It is a show of respect that you have for the importance of your vision.  Do not make the mistake of thinking someone else’s success represents your failure.

Do not waste time being jealous.

Do not confuse the ambition of your work with your career.

You should try and enter the artworld en masse creating as much noise as you possibly can make.  The artworld responds to noise.  It thrives on energy.  It rewards it.  The bonds you have made with each other you should continue to develop.  Stay in touch.  Keep up with where everyone is and what they are doing.  If you are in a position to help, then help.  Tell dealers and critics and curators and collectors about each other.

Be competitive.  Competition is your ally.  Earn each others respect.  Realize that you are only as good as your competition so insist on their excellence and on your own.

Do not listen to anyone who thinks you should be doing something different.  Listen to those who know you can do what you do better.

Learn to recognize opportunities and to exploit them.  Opportunity is what expands your work and challenges you.  You never know ahead of time where the result of an opportunity taken will lead you.  Motion is everything.  Inertia is your enemy.

Don’t be self-sabotaging.  Don’t underestimate the value of your work but understand that whatever someone pays you for it is both never enough and way too much.  Accept that most of you from now on will have to find other means of support while you make your art.  Never confuse that what you get paid or don’t get paid for your art is the true value of its worth.

Define who your audience is.  Identify them by name and address your work to them. Understand that they only exist in your head, in your imagination.  They are historical characters as well as contemporary figures.  They are people you know and people you don’t know – artists and non-artists.  Your mother is always one of them.  They are the voices that you carry around in your head that tell you that you aren’t good enough or that you shouldn’t being doing this or that.  They are both the heroes at whose side you want to sit and the monsters you must slay.  Demons and gods (and your parents) are what shape your work.

Now that you are artists what does that mean?  It means you have been trained to be the eyes and the voice of your culture.  You have been trained to make feelings visible and thoughts concrete.  Your job is to make sense out of sensations; to make order where there is none, shine light into darkness, celebrate beauty, honor the powerful, respect the dead, idolize heroes, mourn the fallen, ennoble the downtrodden, nuance the obvious, have I forgotten anything?  Your job is to continue to do what has always been the nature and realm of art.  Continue to do what has already been done but make it new, make it fresh, compelling, moving and powerful. Your job is to keep art alive.