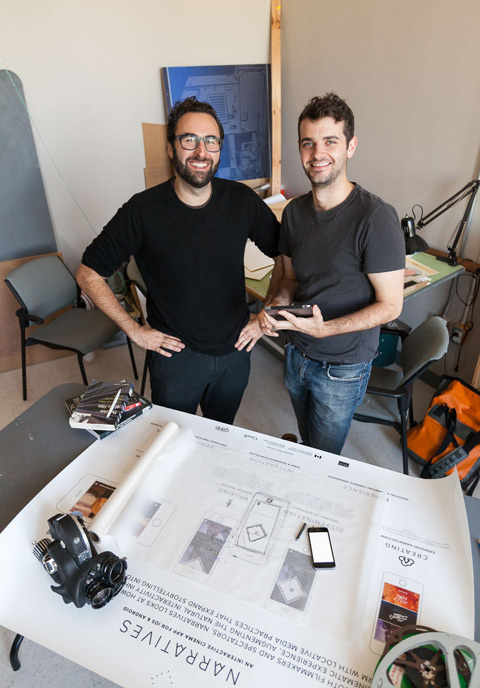 The group was recognized for their app Narratives, a geo-locative interactive cinema application for iOS and Android devices. The conference, also known as Mobile HCI, took place in Toronto from September 23 – 26, 2014.

Competing against bigger schools with bigger budgets from Japan, China, New Zealand, Germany and Toronto, the group presented their project to a highly receptive audience and were overwhelmed when they received top prize.

The app, as described in their research, aims to “transform the cinematic experience by augmenting the natural interactivity inherent in traditional cinematic form with locative media practices that expand storytelling into traversable spaces.”

“The choices that you make to change or generate narrative content, within a specific overall story, are chosen based on your actions. Not so much just a point and click, like with a computer, but what do you do within a day that’s going to define this narrative,” said researcher Andrew Hicks.

Essentially Narratives will change the way both filmmakers and filmgoers engage film because the story is determined by your geographic location which is tracked throughout the day on your mobile device.  You change your location, you change the narrative.

Funded primarily by grants from the Social Sciences and Humanities Research Council of Canada and GRAND: Canada’s Digital Media Research Network, Andrew and Solomon have spent roughly two years working on the app.

“We took a small grant and stretched it really far,” said Solomon.  “We were probably the least funded out of all the other groups.”

Proud of their accomplishments and still reeling from the win both gentlemen were happy to boast about their work, “I think this project really encapsulates what we’re doing at NSCAD, we’re really punching above our weight,” said Solomon.

“We’re a smaller university with not nearly as many resources for research as others universities,” he said.

Andrew and Solomon are eager to begin the next stage of Narratives, which includes further development and hopefully further funding in order to make the app market ready.