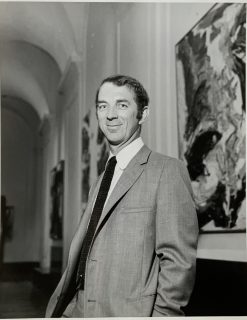 Dennis Young at the Art Gallery of Ontario, where he was Curator of Contemporary Art, September 11,1976. Photo courtesy of John Kennedy.

NSCAD University is saddened to announce that retired Professor Emeritus H. Dennis Young has passed away. Dennis came to Nova Scotia by way of England and Toronto. In 1972, he met NSCAD legend Jerry Ferguson, who would become his long-time friend. Jerry visited Dennis at the Art Gallery of Ontario with a portfolio of prints from the NSCAD Lithography Workshop. A year later, Dennis was invited to create the Art History Department at the Nova Scotia College of Art and Design.

Dennis retired in 1990 after serving as Chair of the Art History Department for eighteen years. He was then conferred as Professor Emeritus. The Board of Governors appointed Dennis as a Life Fellow of NSCAD University in 2017.

I first knew Dennis Young when I was a student in his twentieth-century art history course at NSCAD in 1977. Thinking I was a little smarty pants who didn’t need to study much for the midterm exam, I was shocked when I got a “pink slip” advising me to drop the course. When I took the course again, it was with a much greater respect and appreciation for Dennis’ erudition, especially his deep insight into Marcel Duchamp (this time I got an A+). One might say that Duchamp was Dennis’ avatar, both as a Socratic educator and as an elegant person of great wit and charm. Dennis’ teachings about Duchamp stayed with me and through a circuitous path would lead me on to study art history in graduate school. When I heard that Dennis was retiring in 1990, I jumped at the chance to apply, successfully as it turned out, for his vacated position. After moving to Halifax to take up this position our relationship changed from teacher and student to friends and colleagues. Dennis graciously came as a guest to my classes many times to lecture on Duchamp.

Over the years we had many fine times together, including lunches at Dennis’ apartment and family dinners at our house. We shared a love of esoterica about turn-of-the-century art, cabaret performance culture and the eccentric and often subversive characters that animated it. While Dennis embodied the disposition of the upright English decorum in which he was raised, he was also a Francophile who took perverse delight in the black humour and anti-bourgeois insults of such people as one Joseph Pujol, who became famous as Le Pétomane for his ability to fart The Marseilles onstage. Such was Dennis’ incongruity, and such was the basis of what became our deep friendship. We spent many happy hours talking and laughing as we perused his extraordinary collection of rare and precious books and ephemera. Dennis was a captivating storyteller, and there was a story behind every one of these treasures. Dennis loved a bit of gossip too, truth be told, as long as it was lively and not too mean-spirited.

Dennis played an important role in the formation of NSCAD as we know it today. Although art history courses had been degree requirements since 1969, Dennis was recruited from his post as Curator of Contemporary Art at the Art Gallery of Ontario in 1973 to form an Art History Division and formalize a slate of courses comparable to art history programs at other universities. Dennis also made a major contribution to research by organizing an international conference in 1987 on Marcel Duchamp and editing the resulting book, The Definitively Unfinished Marcel Duchamp, co-published by the NSCAD Press and MIT Press in 1991.

Dennis Young lived a long and rewarding life. I was honoured to be one of his many students, friends and colleagues. He was well cared for in his final months by two other former students and great friends, Lorelei Horne and John Kennedy. Dennis will be much missed.