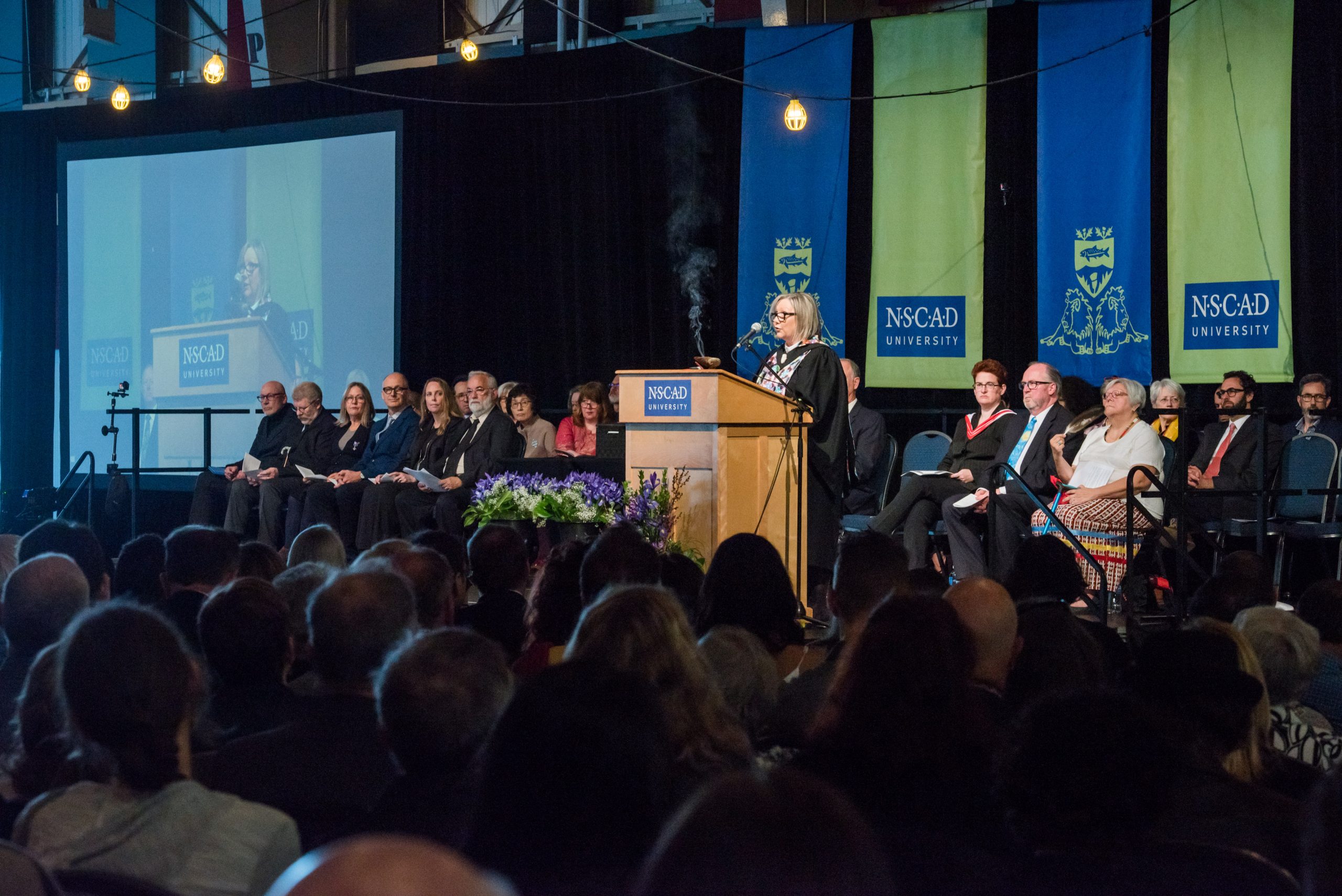 NSCAD University will bestow a philanthropist, an art historian and an alumna with honorary Doctorates of Fine Arts during convocation on April 30th, 2018.

“NSCAD University seeks to recognize extraordinary achievement in Canada or abroad, in community, national or international involvement, and to honour those individuals who provide, through example, inspiration and leadership to the graduates of our University,” says Professor Dianne Taylor-Gearing, President of NSCAD University.

Margaret A. Fountain, C.M. generously gives her time to philanthropy, community service and volunteerism. Fountain has served on many boards and committees and supported a number of organizations nationally and internationally including the Halifax Foundation, Symphony Nova Scotia, the Foundation for Heritage and the Arts, and the Community Foundation of Nova Scotia.

Fountain has also served on The National Arts Centre Foundation and recently joined the Advisory Board of the Talent Fund for Telefilm Canada. She became the Duke of Edinburgh International Award Foundation’s Global Benefactor in 2012.

Well known in Nova Scotia for her support of the arts, Fountain is also supportive of education and health care. She has received many honours and medals, including the Queen’s Jubilee medal. In 2015 she received the Order of Canada for supporting arts organizations focused on music, dance, theatre and arts education.

For decades Fountain has enriched our community with her time and talents, and been a most generous contributor to NSCAD University. She has long been a champion of emerging talent.

She joined the NSCAD Board of Governors in 2003, and in 2005 was appointed Secretary to the Board. Fountain served for 13 years and was appointed Life Governor in 2015.

Ash K. Prakash, C.M. is an independent art historian, advisor, and philanthropist based in Toronto. With a varied and distinguished career spanning four decades culminating in his appointment to The Privy Council in Ottawa, he served as Advisor to the Cabinet Secretariats of two Prime Ministers. He also served as Advisor to UNESCO in Paris, Tehran, New Delhi, and UNDP in New York and Cairo. Additionally, he has served as advisor to some of the most important private and corporate collections and museums across Canada and the United States.

Prakash is the author of several publications, including Canadian Art: Selected Masters (2003); Independent Spirit, Early Canadian Women Painters (2008), and the best seller, Impressionism in Canada: A Journey of Rediscovery (2014). In 2012, he established the A K Prakash Foundation with a dual mission: To advance scholarship on Historical Canadian Art, and to promote Canadian medical expertise in increasing global access to health. The Foundation has sponsored numerous exhibitions and publications in major Art Galleries across Canada (Calgary, Hamilton, Ottawa, Montreal, Québec, Sackville, Windsor) and abroad in the United Kingdom, Norway and the Netherlands. It also awards Annual International Fellowships in Advanced Surgery for medical graduates from developing countries to train under surgeons in the hospitals of the University of Toronto.

Lani Maestro was born in Manila, the Philippines. She received a BFA in Editorial Design from the University of the Philippines in 1977 and an MFA from NSCAD in 1989. While a graduate student, her work was included in the Segunda Bienal de la Habana in Cuba where she won the Bienal prize in 1985. This recognition gained for Maestro local and international attention. Her graduate thesis exhibition was included in the Canadian Biennial of Contemporary Art at the National Gallery in Ottawa in 1989. In the years following, her works were shown as Canadian representation in international art exhibitions including the Biennials of Sydney, Istanbul, Cuba, Sharjah, Shanghai, Brisbane and Busan. Last year, in 2017, she co-represented the Philippinesat the 57th Venice Biennial in Italy.

Maestro is co-founder and editor of Harbour Magazine of Art and Everyday Life, a journal of artworks and writing by artists, writers and theorists. For ten years (1990-2000), she was a lecturer in the MFA program at Concordia University in Montreal. In subsequent years, she taught in the art departments of NSCAD and University of Lethbridge in Alberta.

Lani Maestro is the recipient of the 2012 Hnatyshyn Award for artistic excellence and outstanding contribution by a Canadian artist. She lives and works in France, Canada and Manila.