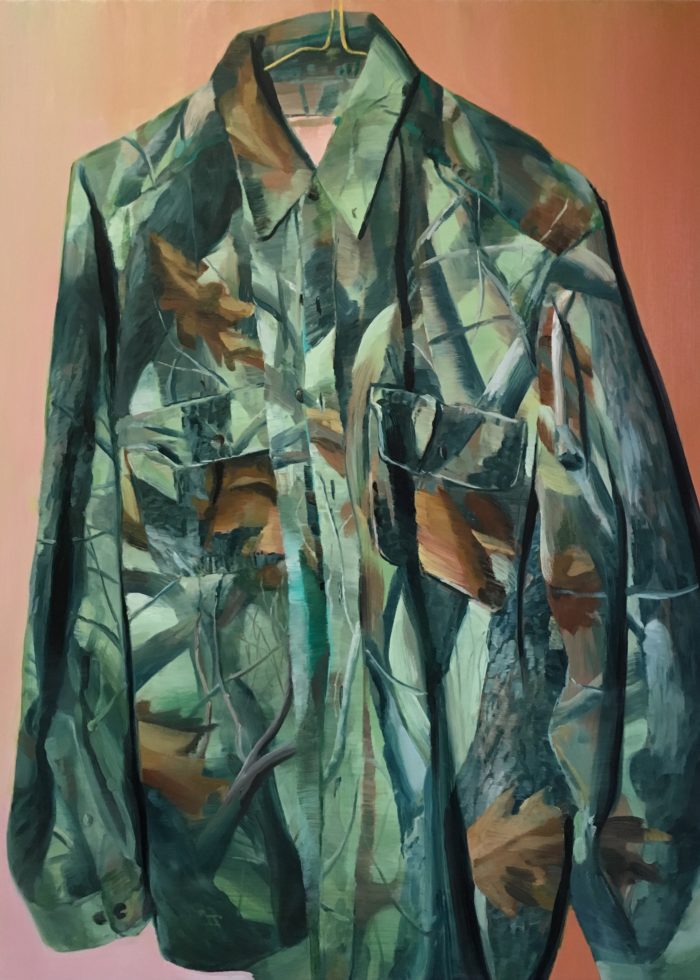 For his first few years out of grad school painter John Player worked in what Post Image Cluster researcher Lise Latreille has called “the aesthetics of power.” Appropriating photos and video still found online, Player, who graduated from Concordia University in 2014, would paint aerial scenes and the interiors of bunkers, exploring themes of surveillance and militarization with a detached sensibility. 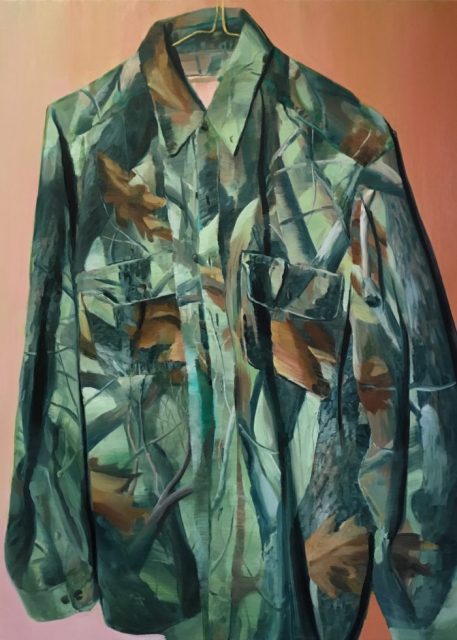 After some time he began to feel boxed in. “[The work] was really inspired by media and spectacle and war, and drone images,” says Player, “I kind of got burnt out from it. I did this for about five years.” Feeling the pressure from the art market, Player felt stuck doing the same work. After breaking from the gallery that represented him he’s now in a far more experimental phase. “I’m trying to see it as a chance to be more empowered in terms of what I can show and maybe not be so interested in showing this fearful view of the world from above.”

His residency at NSCAD was fortuitously timed. Away from Montreal and the pressures of the commercial art scene, Player has taken his time here to try and set out his next creative steps. His bright, sunny studio in NSCAD’s Fountain Campus, overlooking the cobblestones of Granville Street, is hung with recent works. He has brought paintings from Montreal that he considers successful and hung them alongside his works in progress.

There is some continuity here. Finding inspiration from the internet and found images, many of the works are composed in layers – less like collage and more like a computer screen with pop up ads, small objects and scenes superimposed onto background images. Not only that, Player is still keenly interested in unpacking the visual language of the military and masculinity, but in a less austere way. In these new works war and colonial powers take on a slightly (very slightly) more human form: a bust of the roman god Aries, Queen Elizabeth’s profile, or a cologne bottle in the shape of an Admiral – all representations of representations of people rather than direct portraits. If human figures appear in his work they are not terribly personal, and maintain a military discipline and distance.

Player is also learning to bring playfulness back into the work. One painting is of a pink, furry figure with orange gloves, like a man trying to camouflage himself as a Muppet. In other works a childhood plastic dinosaur appears, and in another we find a reference taken from a child’s YouTube unboxing video of loudly patterned shorts. While the palette and visual references are more light-hearted, Player is still investigating serious issues of militarization and colonization, and doesn’t want to appear to trivialize such important subjects. ‘I don’t want to make light of terrible histories, but I feel a responsibility to comment,” says Player.

While he is still finding his footing in this new work, Player is grateful to be able to do so at NSCAD, and to the William and Isabel Pope Artist’s Residency in Painting for supporting him through it. He’s also inspired by the other artists and students at NSCAD. “Concordia really expected you to stick to your discipline, not like NSCAD,” he says, “I kind of wish I had more expertise in other mediums though. I’m trying to move into three-dimensionality.”

For close to a decade in his artwork, John Player has been concerned with reflecting a view of an increasingly militarized world. The Inherited Reign is a developing body of artwork resulting from a break or burnout, a coming closer away from the disembodied realm of aerial landscapes and isolated bunker interiors, looking now towards details and still life studies of often-loaded representations of the same imposed dominant culture. Exploring the myths of infinite growth associated with materials and symbols of paternalist power structures, there is a collaging and fragmented space that appears, a search for an alternative. Employing oil painting and watercolours as an unlikely act of resistance and mode of empowerment to challenge the construct of masculinity, restorative nostalgia and imperialist expansion in settler culture, he delves into his own personalized perspective on hierarchy and in particular, patriarchy. Regardless of painting’s fraught historical use associated with monumentalizing capitalist aims of private property and hegemony, as well as being an object of commodity itself, Player subverts its traditional framework to address contemporary anxiety and repression of colonial guilt and the precarious nature of the status quo.

John Player was born in Victoria, BC in 1983. He holds a BFA in Studio Arts and a MFA in Painting and Drawing from Concordia University. He has participated in various group exhibitions in Montreal, where he has worked and lived since 2004. John was part of the Baie St-Paul Symposium in 2015 and of the Art Omi (NY) residency programme. In 2016, he was awarded the William Blair Bruce Travel Scholarship to undertake research cycling through former Soviet Republics. Finalist of the RBC Painting Competition in 2015, his work can found in numerous private collections and in the corporate collections of Groupe Courchesne Larose and BMO Financial Group.