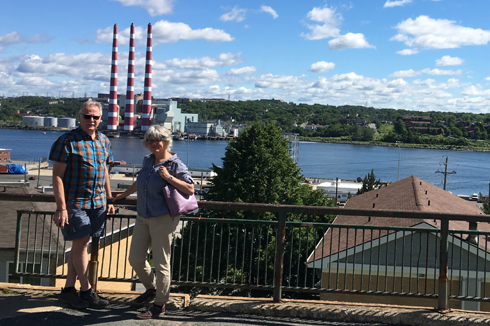 A century later, the signs of the Halifax Explosion are everywhere: you just need to know what to look for.

Depressions in a vacant lot betray the outlines of wooden houses burnt to the ground. Granite foundation stones are all that remain from a long-gone printing shop. A chunk of molten metal in a backyard garden is the residue of what fell as “black rain” that morning.

The day was Thursday, December 6, 1917. Two WW1 ships, the SS Imo and the SS Mont-Blanc, collided in the Narrows of Halifax Harbour, setting off the biggest man-made explosion the world had ever known. Two thousand people died. Nine thousand people were injured. Halifax and Dartmouth were in ruins.

The signs were not apparent to me, as someone who passes through the Halifax area formerly known as Richmond by bus or car. But not so for Barbara Lounder, Robert Bean and other members of Narratives in Space + Time Society (NiS+TS). Not only can they see them, they can feel them.

“When you walk the neighbourhoods, the remnants are everywhere,” says Barbara Lounder, a NSCAD professor and one of the founding members of NiS+TS. As a visual artist, walking is an important part of her art practice.

“They’re psychogeographic remnants of trauma so devastating that we can feel them today,” adds Robert Bean, also a NSCAD professor and media artist.

Founded in 2012, Narratives in Space + Time Society (NiS+TS) is an interdisciplinary research group working on projects involving mobile media and walking. The focus has been on the contemporary manifestations of the Halifax Explosion. NiS+TS (other founding members include Brian Lilley and Mary Elizabeth Luka) has organized approximately 30 research walks and five larger public walks through the neighbourhoods of the Halifax explosion as part of their project “Walking the Debris Field: Public Geographies of the Halifax Explosion.” The society’s work culminates this year, the 100th anniversary of the explosion, with a number of projects, including exhibitions at the Dalhousie Art Gallery and the Public Archives of Nova Scotia, public art walking events, and the launch of a mobile app.

One morning in the summer, Lounder, Bean and I take a walk near the epicentre of the disaster, now blocked from view by the Irving Shipyard. We meet at the Nova Scotia Supreme Court (Family Division) on Devonshire Avenue, built immediately following the Explosion to house the Richmond School. The first Richmond School, nearby on Roome Street, had been destroyed in the blast. On that morning in 1917, two children died inside the Roome Street School, and 87 of their classmates died on the way; many were drawn to the waterfront to see the Mont-Blanc on fire at Pier 6. Nine-year-old Annie Perry Campbell, who lived on Kenny Street, was one of those children. Photographs of her are on display in the lobby of the courthouse.

From the courthouse, we walk through the former community of Richmond (it’s been reduced to a street name) to view the “house holes” at the corner of Albert and Roome Streets, depressions in the grass where houses once stood.  We then pass through Mulgrave Park, which overlooks the Irving Halifax Shipyard. From there, it’s on to Fort Needham Memorial Park, where the official memorial is, and back to the courthouse.

Mulgrave Park reveals a startling panorama of the Narrows where the Imo struck the Mont-Blanc, Pier 6 where the explosion occurred and the contemporary urban geography of Halifax that has been defined by this military disaster.

Both now and then, this area is a diverse part of Halifax, a working-class residential neighbourhood, with industry and military installations along the waterfront. In 1917 it was where the Acadia Sugar Refinery, the Richmond Printing Company, Hillis & Sons Foundry and Dominion Textiles cotton mill were located. Entire neighbourhoods were flattened, including the community of Africville further along the shores of Halifax Harbour. Dartmouth, across the harbour, also suffered; Oland’s brewery was in ruins, and the Mi’kmaq community at Turtle Grove was obliterated. Today, the Irving Shipyard dominates the neighbourhood of the Halifax explosion.

The stories of the dead and traumatized are never far from Lounder’s mind, as she returns again and again to the area. She did the first walk by herself in 2009, retracing Arthur Lismer’s journey that morning. On Dec. 6, 1917, Lismer, then principal of the Victoria School of Art and Design (now NSCAD University) was at home in Bedford, taking the morning off because he always worked Saturdays teaching children. The blast shook the wooden house on Cliff Street, shattering windows, and Lismer set off on foot for Halifax, walking along the train tracks. Along the way to the school (located at the present-day Five Fishermen Restaurant), he made sketches of the devastation. These were some of the first images capturing the explosion aftermath and published in international newspapers. The walk that Lounder made on December 6 also commemorated the Montreal massacre, an event that shares the date of the Halifax explosion.