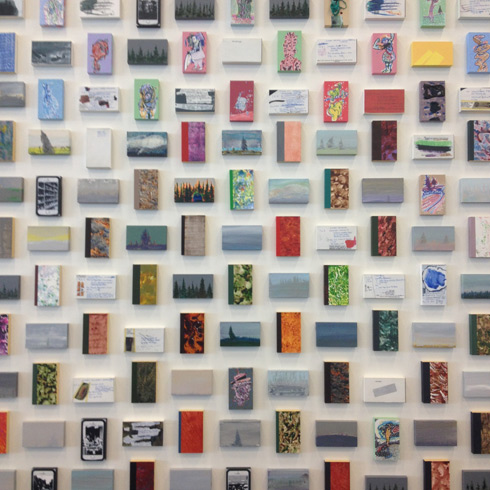 The new Halifax Central Library opened just before Christmas and the people of Halifax still can’t get over that something so cool is all for them.

Figuring into the wow of the new library are the Harry Potter staircases, the incredible view from the top floor, the social spaces where people can meet, talk and sip coffee, and the quiet corners where you can curl up and read a book. Not to mention the art—five-thousand tiny paintings by artist Cliff Eyland (BFA 1982).

Based in Winnipeg, Manitoba, but originally from Dartmouth, Nova Scotia, the NSCAD alumnus won the public art commission for the library after a second call was issued. Long fascinated with libraries, he spent two years on the creation of the work and an entire month on the installation.

Cliff talked about the art commission, his ideas and inspiration, after the library’s opening.

Q: Tell me about the library commission and your ideas for it.

A: I was visiting my mother in Dartmouth when a friend told me that the competition for the Halifax Central Library commission had reopened. I’m not sure how or why I missed the first call, but I put a package together quite quickly and submitted it. I proposed a number of paintings out of thin air; I wanted to make a lot of works, so I thought 5,000 might be a good number, but I could have said 4,000 or 3,000. Of course, once the contract was signed, 5,000 was the number.

I work every day at painting and drawing, and so I always have many kinds of works on the go. When I was awarded the Halifax library commission I decided to restrict the work to a few themes: bookshelves, books, fanciful pictures of librarians and patrons, and a small number of miscellaneous topics related to libraries.

Q: How did it come together?

A: Getting this commission in my hometown was very important to me, and so I went all out—or all in—with it, taking a sabbatical from work and hiring the best assistants (Ray Fenwick, BDes 2003, and Craig Love) I could get. At first I thought that the 5,000 number was daunting and that we might not be able to make it, but we were systematic about production and in the end we were able to bring extra works along so that we could pick and choose amongst them.

It turned out that the original wall that was chosen for the work was too small to fit 5,000 paintings and so another wall on the fifth floor of the building was added to the project.

We spent a month installing, and the fuss was worth it, I think.

Q: How do you hope people will respond to your work at the library?

A: I make my work using archival materials, and it is likely that the public works that I have done in Halifax, Edmonton and Winnipeg will be in place for a long time, so I tend to take the long view on responses to the work. Libraries attract patrons from all walks of life, unlike high-end art galleries, and so I expect mixed responses. I also work in various genres, as mentioned, and so I expect various responses to the paintings. For example, someone might be attracted to a misty Nova Scotian landscape on one of the Halifax walls, and somebody else might be taken by one of the library cards that I have made based on the books in the collection of the Federation of Nova Scotian Heritage. As usual, artists can’t anticipate every response. One irate Nova Scotian artist has told me that he does not like the many depictions of roadside evergreen trees against grey backgrounds in Halifax. These trees are based on the thousands of miles worth of car trips that I have had since I was a child, and essential to the work, I think.  But I could be wrong.

Q: It seems you’ve long been fascinated with libraries. Where did that fascination come from?

A: We didn’t have money to buy books when I was a child living in Dartmouth, so my mom took us to the Dartmouth Library, which has long since been demolished and replaced by a much bigger building. Later in art school I became interested in libraries as public, free -to-enter institutions. Art galleries don’t usually work that way. If you can get in to a gallery free there is limited seating and few books. Malls are private places that seem public, and even city streets can be tough to negotiate for people who just want to hang out. We forget how few public places there are. In any case, libraries are perfect contemplative places for art.

Q: Can you tell me about other library-related arts projects that you’ve done?

A: I have hidden file card drawings in many libraries over the years, beginning with the NSCAD library in 1981. The biggest, longest project I did was at the New School in New York with the assistance of curator Kathleen Goncharov and librarian Gail Persky, who actually organized an “opening” for the installation as a show in 1997. After that I visited the Raymond Fogelman Library there regularly until 2005 to hide more drawings in books. I loved the idea that I was giving away art on Fifth Avenue. I’ve also hidden drawings with permission in the AGO’s library, where I had a solo show curated by Christina Ritchie in 1999, the Muttart in Calgary, and the library of the National Gallery during a residency I did there in 2012 that was organized by Peter Trepanier. Lots of other libraries have become repositories for this mostly secret work over the years. I have also shown my work in many art galleries, and, as mentioned in commissioned works.

Q: Could reflect on your NSCAD experience, the kind of school it is, and how it has affected you as an artist.

A: I’ll give you a slightly skewed answer to that question. My friend Suzanne Paquette taught me when I was I teenager in Dartmouth and took me to NSCAD in the late 1960s. That was my introduction. Later on in 1982 I got a BFA there. NSCAD made me, really. Meeting famous artists and realizing that they were only human was an eye opener. Being taken seriously was also a wonderful thing. I have been disturbed over the years by what I think is an overemphasis on NSCAD’s supposed golden years. The golden years are always now, and I don’t like the emphasis that some people put on NSCAD’s past. The lesson from NSCAD’s best work is to take young artists very seriously and to support them with publications and shows and money and attention.  In terms of the wider art world, the most important institution within NSCAD remains the Anna Leonowens Gallery with its rapid turnover of exhibitions. If I had any say in terms of outreach I’d quadruple the Anna Leonowens budget—do all NSCAD PR through the gallery—and have it do online publications by the dozens, especially about younger artists, and vastly increase its visiting artists budget. It really is a unique institution. And if, on another topic, if NSCAD must downsize for any reason, then I’d want it to stick to core curricula—the basics: the basics plus the Anna Leonowens—that’s it.