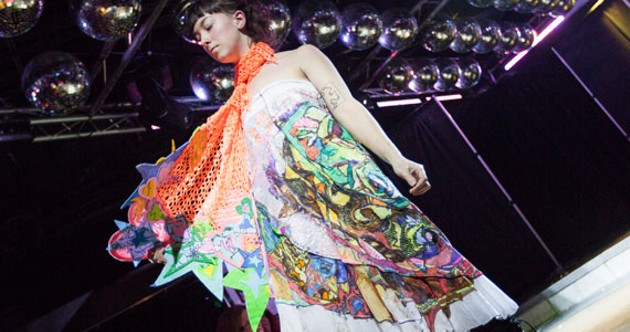 A look back at the first wearable art show

Andrew Harwood (BFA 1991) conceived of the first wearable art show which was originally titled “Wrapped and Lubed, Wrapped and Lewd” as a class project. In an email conversation, Andrew recalls that first show, which took place in the NSCAD cafeteria with spectators sitting in rows on the floor.

I started the show in its first year … The original title was “Wrapped and Lubed, Wrapped and Lewd.” My studio prof at the time was the wonderful David Askevold who let me do this show as my course work for the semester. It was, in many ways, a lot more work than a semester’s worth of studio work.

It was a very scary time for gay men and intravenous drug users. HIV and AIDS are much more mainstream now and the treatments are so much better. It’s very difficult for many young people to know what the first waves of deaths were like and how people just withered away in front of our eyes. And how many people died in the mid-1990s. I think Fashion Cares had been started by the time we did “Wrapped and Lubed” and I think I felt that we needed a local version of that in Halifax.

There were so many reasons to do this show. NSCAD University had the most wonderful Textiles Department (still has) and in many ways for some artist making wearable art, performance and fashion were logical steps of expression for students coming out of this department. It seemed like a win-win situation. It was great for students to get to make experimental wearable art and also a huge morale booster for people living with HIV/AIDS at the time. It seemed like people started to care and to help raise much needed funds for people and for research. I think this show made us all feel a little less hopeless as conservative governments in Canada and the U.S. in the 1980s and 1990s were not very eager to fund any research for cures or treatments.

A lot of young queers in the Halifax community had made panels for the Aids Quilt so to make clothing that celebrated the living was a natural progression of political and creative activity. This experimental fashion show was also very much about the body. Part of the reason we did “Wrapped and Lubed” was that participants of Act Up (I was part of Act Up but not at this demo) did a demonstration at Rumours bar on Gottingen Street and accidentally ripped a giant film screen that was on stage. Gays and Lesbians of Nova Scotia demanded that we repay them for it (then owners of Rumours). So we decided to do a fundraiser. We not only paid them off but had a balance of money to donate to the AIDS Coalition. So the Wearable Art Show was political in nature from its inception.

Every single student we approached to contribute to this show said yes and specifically the Textiles Department faculty and students  were so eager to help in any way they could. What are the moral and community strengths of the materials we work with? What kinds of changes we can affect with our art? These concerns were a big part of the experiment and the line of questioning inherent in the politics of the very first WAS. Plus we thought it would be fabulous and fun for all.

It was a very inclusive event with wearable art, performances and fashion. There was a cape made out of T-shirt fabric with balloons sewn inside and then blown up made by Joelle Renzi; a clear plastic outfit with red feathers sandwiched inside and trimmed with the same material made by Michelle Cote (Wake); and I showed my handknit sweater that had derogatory words like “FAG” spelled backwards in contrasting stitching. All of the clothes and performances were just divine and the audience stayed and danced with the models and designers and artists. The energy of that evening was electric—I think we didn’t think we could pull it off. I remember feeling a sense of joy at working so hard on something so meaningful and ultimately helpful to both my fellow students and people in the HIV AIDS community.

I think we thought less about our art and performances and more about the people we were trying to help and to those we were trying to repay. In many ways the students participating knew that they could help and gave of their time, creativity and skills without question.

It was less a platform to show off but rather one to show up and help out others. This event was about love and repayment and community.

Andrew Harwood (BFA 1991) completed a Master’s Degree in Fine Arts from the University of Manitoba in June. He currently has an exhibition of work on at Paul Petro Contemporary Art in Toronto called Phantome Aesthetique – Notes From Funeral Camp. He is a visual artist based in Toronto.

IF YOU GO: The 25th Anniversary Wearable & Performance Art Night takes place on Thursday, March 5, 7 p.m. Tickets are $10 in advance, available at the NSCAD Art Supply Shop, Venus Envy and online at wearableartshow.myevent.com. Tickets are also available at the door the night of the show—the first 200 people will qualify for the $10 admission price. After those run out, tickets will be $20 or $15 for students. Admission is restricted to those 19 years and older.