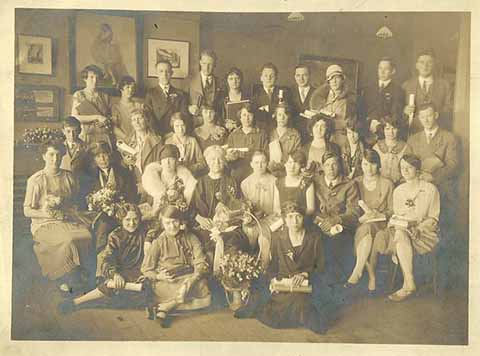 Where women held the fort

When Nova Scotia ceramicist Joan Bruneau attended the Nova Scotia College of Art and Design in the 1980s, she was following a path blazed by her aunt more than a half century earlier. Joan inherited her love of art and travel from her artistic aunt, who used to babysit her every Saturday well supplied with paper, paints and pipe cleaners.
At 106 (and a half), Elizabeth Williams is NSCAD’s oldest surviving graduate. Joan recently visited with her at her home in Cape Breton and listened to remembrances about her art college days from 1924 to 1928. “NSCAD is one of Nova Scotia’s most valuable treasures,” said Elizabeth in response to her niece’s request to reminisce.

The school was still called the Victoria School of Art and Design in the 1920s, renamed the Nova Scotia College of Art during Elizabeth’s graduating year. It was located on the top two floors in the building now occupied by the Five Fishermen Restaurant, overlooking Halifax’s Grand Parade, and next door to Snow’s Funeral Parlor. Elizabeth recalls that the school was dilapidated—“ramshackle” is her word—“there was no money at all.”

From Sydney Mines, Elizabeth went to the Halifax school on a scholarship from Sydney Mines High School and with the encouragement of her high school principal, Mr. Spraklin. At the time, post First World War, most of her classmates were girls. Marguerite Zwicker (1904-1993), who became well known as a Nova Scotia artist and arts promoter, was one of her classmates.

The teachers were mainly women too. Elizabeth Styring Nutt, hand-picked by Arthur Lismer to be his successor, was the principal and taught painting. Margaret Brodie taught basketry. Marjorie Tozer and Frieda Creighton were also among her teachers. Classes were small and the teachers treated students like family.

“Teaching was Miss Nutt’s life,” recalled Elizabeth. She still has a few textbooks written by the formidable head mistress who presided over the school from 1919 to 1942. “She brought students’ talents and abilities out rather than spoon feeding them.”

Elizabeth studied design, drawing and painting at the school. She also learned basketry, which she ended up teaching at the Nova Scotia School for the Blind in exchange for room and board. At the time, Halifax had a large blind population because of the Halifax Explosion in 1917.

After graduating as an “Associate of the Nova Scotia College of Art,” Elizabeth landed her first job in Quebec City designing neon signs—a new technology—and was later transferred to Toronto. But the firm she worked for went out of business during the Great Depression in the 1930s, and Elizabeth made ends meet freelancing as a graphic designer. She even designed headstones.

In 1933, she resolved to become an art teacher and returned to her native province to earn a teaching license at the Normal College in Truro. One of her first teaching jobs was at a girl’s reform school in Sweetsburg, Quebec. She boarded a coal boat from North Sydney to Montreal, completing her journey by horse and wagon. She “taught everything” at the school for girls aged 10 to 21, including art and drama. She also wrote and produced school plays.

During the Second World War, and interested in seeing Europe, she wrote to Ottawa with an offer to enlist. She worked as the entertainment coordinator for the women’s regiment and was stationed in England, Belgium and briefly in Germany during the years 1941 to 1945.

Following the war, Elizabeth returned to Halifax and taught in a small school in Tufts Cove. From 1948 to 1970, she served as an art teacher and supervisor for the Halifax City School Board.

Elizabeth painted throughout her career as a teacher and during retirement too, but she eventually had to give it up as her vision failed with macular degeneration.

Her wartime experiences whetted a love of travel, which she satisfied with overseas trips to Europe and Egypt during summer holidays. After retirement, she traveled through South America all the way to the Galapagos Islands in 1972.

“She never married and valued her independence,” says Joan, who teaches part-time at NSCAD and marks her 19th year at her studio-showroom Nova Terra Cotta in Lunenburg. “Every Saturday, Elizabeth would bring out the manila paper, tempera paints and pipe cleaners when she babysat me and my sister. She had us making art at a very early age and continues to inspire my wanderlust with her travel books and stories. Her engagement in others and infectious love of life continues to inspire those who know her.”