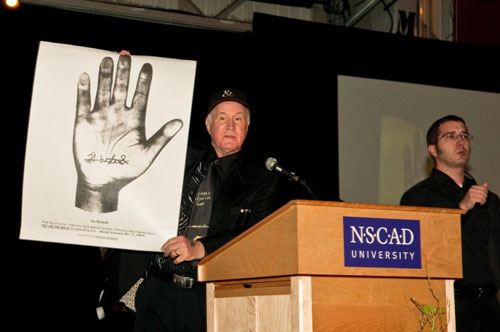 NSCAD University recognized renowned Canadian contemporary artist Iain BAXTER& and Coach House Press founder Stan Bevington with honorary degrees at the 2010 Graduation and Commencement Ceremony. The event, held on May 15 at the Cunard Centre in Halifax, celebrated the graduation and commencement of 233 students.

A thought-provoking contemporary artist, Iain BAXTER& has spent the last 50 years re-shaping and re-defining the Canadian modern art scene. He has been described as Canada’s first conceptual artist and labeled “the Marshall McLuhan of the Visual Arts.” Throughout his career, Mr. BAXTER& has garnered critical international recognition for his insightful and thoughtful works about cultural, social, ecological and political condition. At the forefront of conceptual and photographic art, Iain BAXTER&’s investigations into environmental issues, mass consumerism and modes of communication have continued to challenge and elicit responses that question our day-to-day realities.

In 1965, a young typesetter named Stan Bevington, newly transplanted to Toronto from Edmonton, rented an old coach house and installed an antique Challenge Gordon platen press. And so was born Coach House Press, which over the years introduced Canadians to the early works of writers such as bpNichol, Michael Ondaatje, Margaret Atwood, George Bowering, Nicole Brossard, Frank Davey, Ann-Marie MacDonald, David McFadden and Anne Michaels. Known for its advocacy of the avant-garde and for many author/artist collaborations, Coach House has published more than 500 titles since its inception, and prints more than 200 books a year for other presses, including catalogues for libraries and art galleries.

“We were delighted to recognize the achievements of these two remarkable individuals,” said Professor David B. Smith, NSCAD University President. “Together, they helped define and influence the direction of contemporary culture in Canada. As creators and innovators, Iain BAXTER& and Stan Bevington introduced Canadians to new voices, new perspectives and new aesthetics in art and literature.”

BAXTER& and Bevington were each conferred with a Doctor of Fine Arts (honoris causa) degree. David P. Silcox, C.M., NSCAD Honorary Governor and president of Sotheby’s Canada, introduced both recipients.

Ray Cronin, BFA ’87, Director and CEO of the Art Gallery of Nova Scotia, delivered this year’s Commencement Address. A graduate of NSCAD University and the University of Windsor, Cronin was the Curator of Contemporary Art at the AGNS until his appointment as Director. He is the founding curator of the Sobey Art Award.