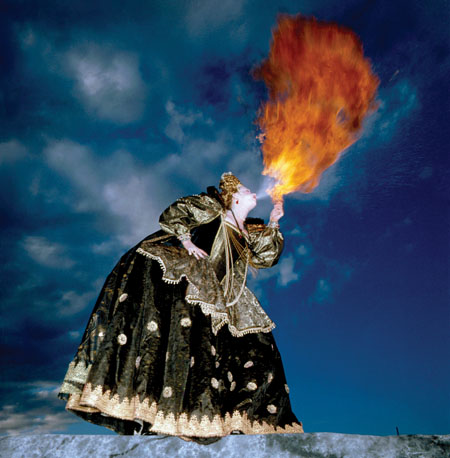 Performance artist Tanya Mars and the Honourable Wilfred P. Moore, Q.C., will be awarded honorary doctorate of fine arts degrees at NSCAD University’s Graduation Ceremony on May 17.
Provocative, political and very funny, Mars has been a key figure in Canadian art since the mid-1970s. In 2008, she received a Governor General’s Award for Visual and Media Arts, and later that same year, was named the Canada Council’s International Artist in Residence in Paris, France.

As a performance artist, she “loves to mash it up” — combining feminism and humour, the historic and the contemporary. Past work includes the personifications of strong female archetypes: Queen Elizabeth I (Pure Virtue), Mae West (Pure Sin) and Alice of Lewis Carroll’s Alice’s Adventures in Wonderland (Pure Nonsense). Just days before NSCAD’s graduation ceremony, Mars will be in Montreal performing Homage to the City of Women: Leaves of Gold, which is inspired by the six French tapestries known by the modern title The Lady and the Unicorn.

She is a senior lecturer with the Department of Arts, Culture and Media at the University of Toronto Scarborough where she teaches foundation, performance art, video, and studio practice.

The Honourable Wilfred P. Moore has been an advocate and supporter of NSCAD University for many years. He was instrumental in creating the NSCAD-Lunenburg Community Studio Residency.  Now in its eighth year, this program allows recent NSCAD grads to develop their artistic practice in their own studio space. Over the years, many  former residents have chosen to continue living and working in Lunenburg, and the program has become a model for NSCAD residencies in other Nova Scotia communities, including New Glasgow, Sydney and Dartmouth.

Senator Moore, who has an undergraduate degree and an honorary degree from Saint Mary’s University and a law degree from Dalhousie University, was appointed to the Senate by The Right Honourable Jean Chrétien as a representative of the Province of Nova Scotia in 1996. His areas of interest include post-secondary education and regional economic development.