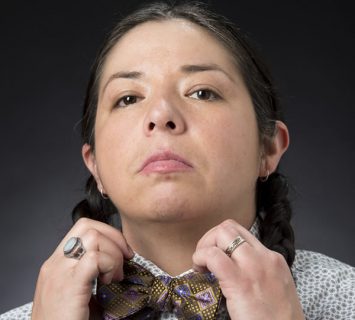 Ursula Johnson won the prestigious Sobey Art Award, the preeminent prize for Canadian artists 40 years of age and under.

More than a week after her Sobey Art Award win, people are still asking Ursula Johnson what she said. That’s because she started off her acceptance speech in Mi’kmaq.

“Basically I said ‘holy crap,’ and then how grateful and appreciative I was to share the moment with my colleagues,” says Ursula, the first Atlantic finalist to win the Sobey Art Award since its creation in 2001. “Then I said, ‘I should speak English because no one can understand me except my mother.’”

But her joy and surprise did not need a translation.

“It’s kind of strange—this whole idea of an art prize. I mean, with athletes it makes sense. You award the one who races first to the finish line. But with artists, there’s no time clock, no measure, and I’m a really big advocate of working together.”

In fact, her love of working with other artists is one of the things the jury cited in making their selection: “Ursula Johnson was singled out ‎for her strong voice, her generosity and collaborative spirit,” said the jury in a statement.

Winning the Sobey Art Award is a high during a year of upward career elevation for Ursula, an Indigenous performance and installation artist. She was a featured artist at Landmarks 2017 with a collaborative project at Cape Breton Highlands National Park; at Nocturne: Art at Night in the Public Gardens; and at VIVA Art Action in Montreal, to name just a few highlights. At the same time, her exhibition, Mi’kwite’tmn (Do You Remember), curated by Robin Metcalfe and organized by Saint Mary’s University, has been touring nationally and is now at The Reach Gallery Museum in Abbotsford, BC.

In the midst of an intensive schedule, Ursula retreats to Kejimkujik National Historic Park where she works as a guide in the summer.

“I do all this crazy stuff and then summer comes, and I’m in nature for four months. I hike, paddle and bike,” she says. “It’s really important.”

She also gives credit to her NSCAD education, and singles out exemplary teachers including Rita McKeough, Michael Fernandes, David Howard, Nancy Price, and the late Mickey Handy, who taught Intro to Studio Practice. She tells a story about being overwhelmed at school and turning up in his office, wanting to quit. Expecting a pep talk, she got tough love instead.

“I felt I had too many assignments and was spending too many hours doing work,” she recalls. “But Mickey kicked me in the butt. He said, ‘if you think this should be easy, then maybe you shouldn’t be here. Then he said, ‘see you on Thursday.’”

That Thursday, Ursula turned up to class, with a renewed commitment to her studies. She remembers how Mickey welcome her: “’Where is my colour wheel?,’ he demanded, and I go, ‘I have two!’”

Nova Scotian artist Ursula Johnson’s remarkable practice is built on memory and community. At this time when Canadians are celebrating and challenging the memory of nationhood, Johnson’s work embodies a considered, critical, yet generous lens through which multiple histories and communities may be considered. A member of the Eskasoni Mi’qmaw First Nation from Cape Breton Island, Johnson’s own circle of family members are accomplished basket-weavers. Drawing on this history, that of a skill specific to her own Mi’qmaw community, passed from generation to generation, Johnson explores what it means to honour and preserve those things that cement a culture or people. Bringing out the very best with her collaborators, she finds commonality among their differences. As Johnson’s work centres on memory and community, words she spoke at the outset of her performance, re(al)-location resonate deeply. Calling on all those gathered in Highland Park, she noted that water holds memory, and that on that very day, in that place, we were changing it and making new memory. This is at the core of Johnson’s practice: she honours what exists and what has come before, and calls on the active, conscious action of those around her to change what is yet to come.