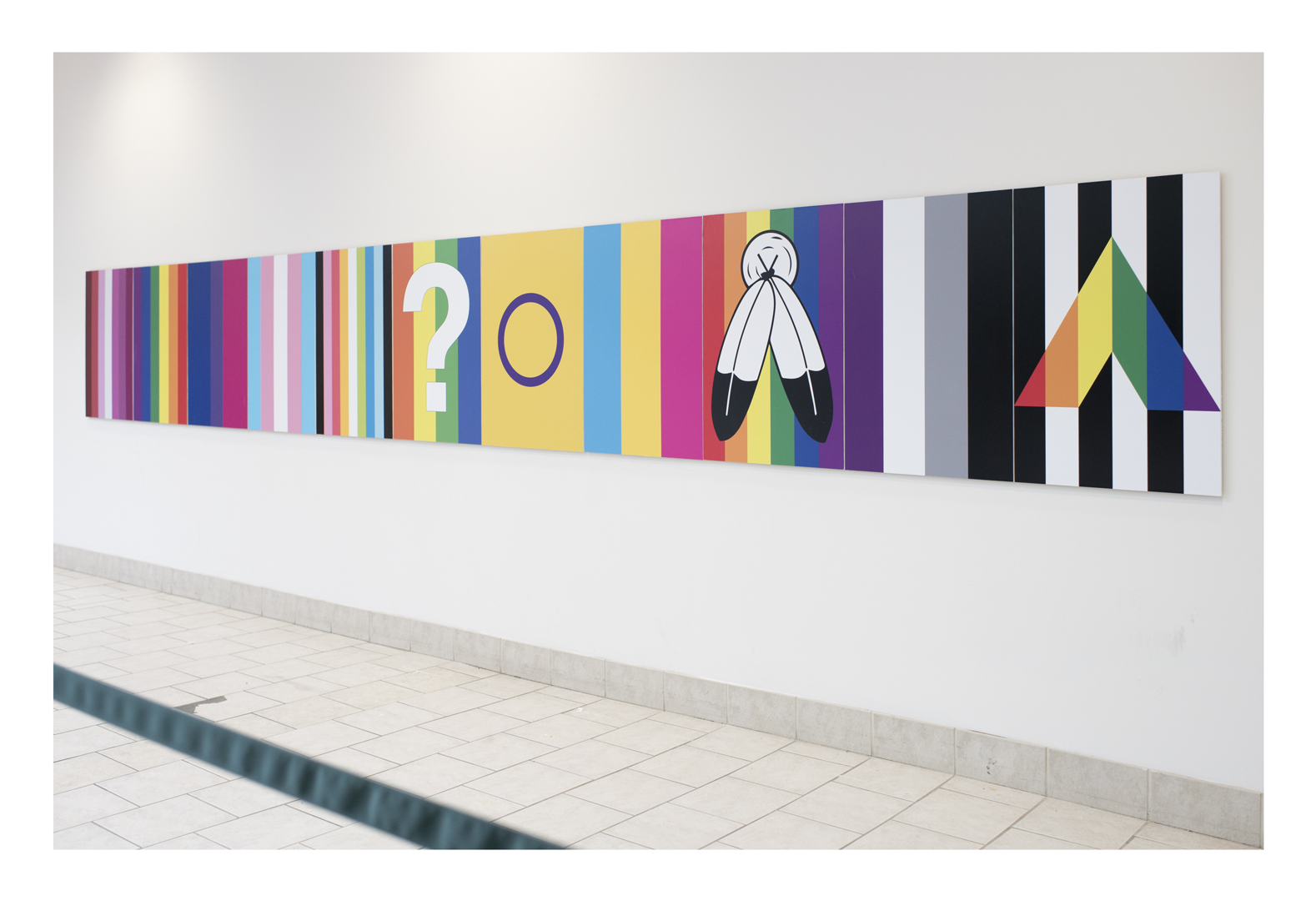 We are delighted that NSCAD’s Advanced Sculpture Workshop (BFA and MFA) have been invited to display their work at the Halifax Stanfield Airport throughout 2018. The calibre of the work once again demonstrates the talented students we have at NSCAD and the way they have raised the bar on art and design education.

Take the time to stroll round the airport and see the exhibits, but until you do, here are images and artist descriptions of the work on display.

Painting, Oil on canvas and panel

Flora sanctuary, is an artificial green space created to bring a sense of serenity to those who see it. My installation is series of raw canvases and cut-outs with drawn and painted depictions of plants. This series of works will hang along the walls of one of the lower hallways in the airport. The plants depicted are a compilation of the provincial Canadian flowers, the national plants of the countries from which there are direct flights to and from, and the national plants of the top ten counties from which people immigrate to Canada. My hope is that this installation brings a sense of calm to people who walk by it wherever they may call home. The installation also aims to highlight the importance and familiarity of the nature that surrounds us all.

My sculpture transforms a pair of stanchions into a musical instrument to explore sound as a way to direct airport visitors. Two mbiras are grafted onto the hollow stanchion posts and a crank on top of each operates a playable pattern on the tines. The dividing belt is replaced by a rigid copper strip with a metal punched melody running its length as musical inspiration.  A Flyweight is a device specifically designed to efficiently store rotational energy and as my title it emphasizes the participatory action for my sculpture. While waiting for flights, Flyweight is an invitation for visitors to turn the cranks and play.

This quilt is about ritual, I wouldn’t consider myself a person that commits to a ritual in my work or life. When I find myself travelling I do tend to follow a ritual no matter what airport I’m in. Check your bags. Go through security. Find out where your gate is. Buy a word search. Buy a tea. Go sit at your gate. Wait. It’s the rituals that calm me down when I’m travelling. When I quilt and embroider it’s also about ritual, following each step is crucial to completing the project and it gives me a sense of calm which is something I value a lot. I learned to quilt from my family, it’s a tradition of my family and something I’m proud to carry on as the 5th generation of this technique. I decided to combine my travels around Canada and my passion for quilting to create a piece that pays homage to those who taught me as well as the country that I call home. A piece that doesn’t keep my rituals a secret but shares them in hopes that the journey becomes a shared experience.

I am inspired by the individuality of people in Canadian culture. This piece was made to acknowledge identities that add diversity and vibrancy within communities. I wish those arriving into Halifax feel welcomed and know that our culture recognizes a growing awareness of identities.

Clouds, Defined plays off a pseudo-scientific classification system. Clouds connect with dreaming but also with awareness, sensation, and emotion. Just as it is very difficult to classify clouds, it is also incredibly challenging to classify, or even have an awareness of our emotional states. Clouds, Defined comments on the constant changes undertaken in the study of human emotions, where the number of feelings we can experience is constantly changing and being redefined. Creating a label of care for such emotions is futile, given that we process our emotions in vastly different ways that are largely abstract.

Bird in Vacuum is an 8ft tall simplified airplane wing standing out of the floor at a slight angle. Coming off of the side is a heat formed plastic form that mimics the vacuum that comes off the wing of an aircraft, holding the aircraft in flight. It makes reference to Bird in space by Constantin Brancusi. As well as the form of the tall wing and flight like shape that is shared between these two sculptures. This piece is an exploration of the forms of flight, focusing on bringing the unseen shapes of air and flight into the visual world.

The artwork will be paid 18 cents a minute, 11 dollars an hour (minimum wage in nova scotia) for every second that it is viewed. The artwork’s payment is added to its sale value, which will grow over its 8-month residency in the Halifax airport.

To experience the artwork the viewer must be willing to add to its sale value. The more that the work is enjoyed the more valuable it becomes.

The art work for this residency is Hatched Head 14/100. in Graphite, by Gavin Petersen.

Family Portrait, is based on five airport aerial runway views of cities she and her family are connected to. They are arranged geographically from west to east, starting with Kelowna, Edmonton, Saskatoon, Winnipeg, and Halifax. The runways are spaced just far enough apart to create visual tension that represents the strain placed on family relationships when they are subject to distance. The surface of the aluminum is polished to display the best and functional part of those relationships, however by looking closer at the pieces one sees the scars and surface marks left behind from the process. Ultimately the work explores ideas of family tension, displacement, and how airplanes and airports have altered the way people disperse.

Facing the impending closure of the public observation deck at the YHZ Stanfield Airport, a second floor waiting area that offered a quiet and contemplative atmosphere and unobstructed view of the landing strip. It is accessible by a dual elevator located before security clearance. Archival audio/video documentation of the space was taken on January 20th, 2017 in attempt of preserving its memory. The entirety of the documentation is presented nearly unaltered; including the audio capturing the ambient room tone punctuated by control tower transmissions that were broadcast quietly in the space by a Realistic Pro-2023 UFH/VHF scanner being used by the lone occupant of the observation deck at the time of filming. The video emphasizes the stillness of the interior alongside the subtle movements of ground transport vehicles moving across the landing strip, the act of observation used as an entrance point into a sentimental exploration of the space itself.

Look up at the sky as your loved one is aboard a craft speeding to a destination. Look out your window at the suspended clouds and the tracts of land below as you return home. Over the Horizon, an installation which features the image of a contrail, is a meditation on this mode of travel where the temporary trace of vapour in the sky from a plane is suspended in time. Spanning 30 ft, the work marvels at the distances we are taken and the air we course through.

When you walk into the food court of the Halifax Stanfield Airport, the recognizable shape of an owl is perched on top of a pole. Its a large bird, its a Barred Owl. Why is this owl in the airport? Was it by chance? Is he fending off vermin? It must not be real. You then go on past security to get to your gate, walking to your gate you see a large photograph of an owl. In the photograph you see it must be the same owl that you saw earlier, only this owl is with out a doubt real. Underneath reads #barredowlbenton promoting you to find this character on Instagram and learn more searching this hashtag. This interactive diptych was created by Calgary artist Philip Kanwischer, a current graduate student at the Nova Scotia College of Art and Design. Philips work is a critique of the relationship between humans and wildlife through photography and sculpture.

Throughout my practice I have developed an interest in social relationships, interaction, and culture. Spark is an interactive installation that works when two seats opposite one another are occupied. When the light turns on, a relationship is formed between the occupants, one which they may not even be aware of. I thought about ways I could connect strangers in a space that is not typically meant to do so when tasked with placing a piece of art.

All photos by Philip Kanwischer.