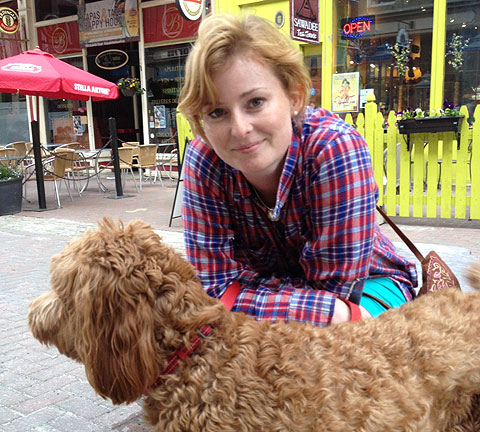 Singer/songwriter Jenn Grant recalls the day she took a tour of NSCAD’s Granville campus and decided she needed to apply.

“I went to Saint Mary’s first and it just wasn’t a good fit for me,” says Jenn, who is freckled and strawberry blonde, born and raised in Prince Edward Island. “And then I took a tour at NSCAD … afterwards I cried a little bit, right over there,” she adds with a wave of her arm, indicating a place in the shadow of the stone lions where she once wiped away her tears.

“It felt good. It felt like a place where I could be inspired.”

She included a demo tape as part of her entrance portfolio, but at the time was shy and suffered from such debilitating stage fright that she couldn’t perform in front of anyone who wasn’t a family member. That changed while at NSCAD, where she found her artistic voice and felt supported to experiment and try new things. Then, after attending a Tegan and Sara show at the Marquee Club, she summoned up the courage to sing at an open mic night with two of her cousins providing back-up. Not long later, she released an independent five-song EP, Jenn Grant and Goodbye 20th Century.

“At that show (Tegan and Sara), I felt like I was missing out on my life’s purpose,” she reflects. “But suddenly, I had no fear at all … I do feel NSCAD gave me the strength to be a performer and not be afraid. I had enough confidence that my hands wouldn’t shake so much when I played guitar.”

Jenn graduated with her BFA in 2006 and cites her teachers Leya Evelyn and Michael Fernandes as major influences. That same year, her career was in full bloom with the release of her first full-length CD Orchestra for the Moon (one of her paintings is on the CD jacket) and her songs got play on shows like Grey’s Anatomy and Heartland. The CD Echoes followed in 2009 and Honeymoon Punch in 2011. She has an emotive voice “like brushstrokes on canvas,” as one reviewer said so perfectly.

Over Christmas, in a cottage on PEI, she wrote for her forthcoming The Beautiful Wild, due to be released in September. She compares the process of writing and recording to a mixed media painting, building up layers of textures and colours, and the feedback from her band, including her producer/husband Daniel Ledwell, to a painting critique.

The Beautiful Wild is a collection of songs for her mother, who passed away in May after a recurring battle with breast cancer. At the time of the writing, however, she wasn’t even sick.

“She was so proud of us, my brother and me.” Jenn’s brother Daniel Grant is a cinematographer. “Her big lesson for us was to find our passion and I’m so happy to say we followed her advice.”