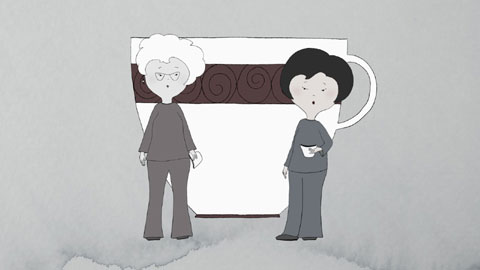 Every week in Seoul, South Korea, an elderly group of Korean women gather outside the Japanese embassy to protest. Coerced into sexual slavery during the Second World War, these women, now in their 80s, want a formal apology for their treatment.

It’s estimated that 200,000 young women and girls from countries across Asia—“Comfort Women” —were recruited to offer sexual services during the war. But despite weekly demonstrations, ongoing since 1992, their story is still largely unknown.

“There’s a lot of shame around the issue. Although these war crimes happened during the Second World War, it wasn’t until 1990 that the first comfort women—or ‘grandmother’ as they are now more commonly called—went public about what happened,” says filmmaker Sam Decoste, who is studying for her Master’s of Fine Arts degree at NSCAD. “It’s the largest human smuggling case in human history yet we hear very little about it in the West.

The issue is at the heart of Mary & Myself, which was just nominated for a Canadian Screen Awards in the category of Best Short Documentary. The Canadian Screen Awards, celebrating the best in film, television and digital media, will be awarded during a live broadcast on Sunday, March 9 on CBC.

Even with its heavy subject matter, Mary & Myself will make you smile. The story of the comfort women is framed by the story of friendship between two Halifax seniors as they prepare to perform in a local production of The Vagina Monologues. The film is narrated by Jia Tsu Thompson, one of the two women who conquered her fear and took to the stage to speak the devastating lines; lines like these which tear at the heart – 50 soldiers a day/Sometimes a shipload of them … The ‘Mary’ of the title is Mary Mohammed, the founder and former owner of Mary’s Bread Basket in The Brewery Market.

Jia Tsu, a retired molecular scientist, ran the Mulan Tea House for several years on Lower Water Street in Halifax. That’s where Sam met her. After a seven-year stay in Taiwan, Sam often dropped by to converse in Chinese. When Sam heard Jia Tsu’s Vagina Monologues story, she knew she had the basis for a film and pitched it to the NFB. With Jia Tsu’s charming narration and Sam’s elegant hand-drawn animation, it’s impossible to resist Mary & Myself.

Directed and animated by Sam Decoste, Mary & Myself had its premiere at Hot Docs Festival last Spring, and was screened at the Atlantic Film Festival in September. It’s now being translated in Chinese for submission in film festivals in Asia.

“Animation is an accessible form and you can use it to explore issues that maybe people might otherwise not want to listen to,” says Sam, grateful for the Canadian Screen Award nomination if it means more people will know about the comfort women and their need to hear an apology before they die. As expressed in the script of The Vagina Monologues – Say it/Please/We are sorry, Comfort Women/Say it to me/We are sorry to me…

SEE A CLIP: Mary & Myself on the NFB website