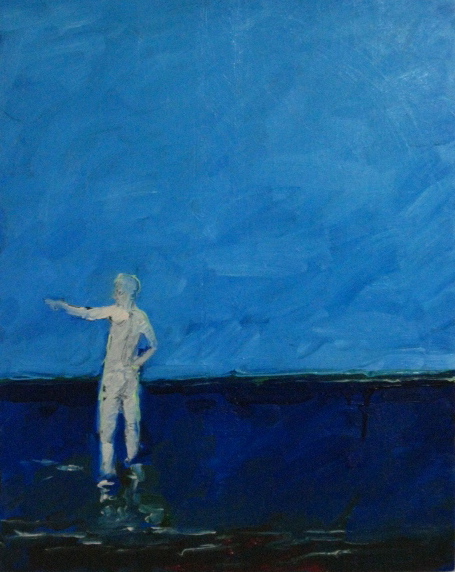 Foundation drawing teacher Ian McKinnon has been named artist-in-residence at St. Paul’s Anglican Church—the first to hold the position since the church was founded in 1749.
“This was out of the blue for me. I got a text just as I was turning in one night. The rector (Paul Friesen) reported that the Parish Council had discussed it and would I accept?” says Ian, seated in one of the well-worn pews of the historic church, the oldest surviving non-Roman Catholic church in Canada and the oldest building in Halifax.

He’s honored by the role and the “great generosity and real enthusiasm” in which it was offered to him. “As I understand it, the position is mine to make.”

A 1980 graduate of NSCAD, Ian has worked throughout his career as a studio-based artist and teacher to integrate the artistic and the spiritual; he regards his artistic practice as being a conversation between theology and contemporary art.

“I’ve always felt the making of art—not just the content of my art—to be meditative and contemplative. And that’s how I came to the Christian faith, through my art practice,” he explains.

In 2008, he chose to delve deeper into his dual roles as an artist and a person of faith and applied to Trinity College at the University of Toronto for a master’s degree in Theological Studies. His thesis, entitled Mutual Illumination and the Artist: Dispossession, Disinterested Love and Making Other, was both a personal examination of his artistic output through a theological lens and a questioning of how/why theology and the art world became so separate over the centuries when once in lock step. Think of Michelangelo painting the Sistine Chapel or Leonardo da Vinci’s Last Supper.

After doing his master’s degree (he also has a MFA from Concordia), the next logical step would seem to be entering the priesthood. Ian thought so too, but now believes he has not been called to be a parish priest, but to continue in his vocation as an artist/teacher. Being named artist-in-residence is a joyful affirmation of that belief. He hopes to make St. Paul’s more open to hosting art exhibitions, like the one held just before Christmas; Perceptions and Perspectives was an exhibition of drawings of St. Paul’s interior by students in his first-year drawing class.

He will also be able to set up a studio in Parish House, located just across the street from St. Paul’s, and hopes to return to painting.

According to a press release sent out by the church, “St. Paul’s artist-in-residence program was recently established to support and invigorate the historic role of St. Paul’s in Halifax, and to return St. Paul’s to the centre of the Halifax’s art conversation. Its aim is to bring together artists, advocates, educators, and government officials to exchange ideas and develop conversations that strengthen the reciprocal relationship between the arts and St. Paul’s Church.”

“St. Paul’s is rebranding itself, if you will, and rebuilding its connections to arts and culture amidst its uninterrupted 264 year old calling to the worship of the transcendent, its nurturing of spiritual disciplines and its social outreach to the marginalized of our downtown neighbourhood,” says Ian. “I’m happy to be here to encourage things to happen.”