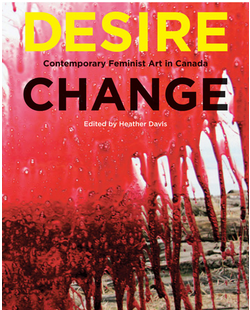 Desire Change is the first publication to record the diversity of contemporary feminist art in Canada. The book’s 14 essays by artists, scholars, and curators draw on the work coming out of artist-run centers and feminist art institutions to link current practice to its precursors. With extensive footnotes, this volume adds a corpus of supporting documentation to a previously underdeveloped area of study. The book examines the work of contemporary artists working in different media from a range of intersectional perspectives, divided in to three sections: Desiring Change: Decolonization; Desire: Intersection of Sexuality, gender, race; and Forms of Desire: Institutional critique and feminist praxis. Heavily illustrated with representative works in all media, the volume ends with a working chronology of feminist art infrastructures in Canada, compiled collaboratively via a survey of feminist cultural producers. Desire Change was selected from among 14 Canadian art and architecture titles nominated for the 2018 award.

The Melva J. Dwyer Award was established in recognition of the contribution made to the field of art librarianship by Melva Dwyer, former head of the Fine Arts Library, University of British Columbia. It is given to the creators of exceptional reference or research tools relating to Canadian art and architecture. Dwyer was a champion of the arts and of art librarianship who mentored a generation of ARLIS/NA colleagues. This year’s award is especially poignant as it is the first given in her name since her passing in November 2017 at the age of 98.

About Melva J. Dwyer (October 29, 1919 – November 13, 2017)
With a diploma in piano and a master’s degree in history, Dwyer joined the University of British Columbia Library after completing her MLIS at the University of Toronto. Dwyer quickly set to work building the first major art library in western Canada, relying on her expertise and helped considerably by a large monetary donation. In 1967, she became the first chair of CARLIS, the Canadian Art Libraries Section of the Canadian Association of Special Libraries and Information Services Division. This group later migrated to ARLIS/NA to become the Canadian Chapter. Throughout her career, Dwyer was active in ARLIS and IFLA, and travelled extensively to further develop connections with colleagues and book dealers. She retired from the University of British Columbia in 1984.

Karin Cope
Karin Cope divides her time between Nova Scotia and British Columbia. She is a poet, sailor, photographer, writer, activist, blogger and Associate Professor at NSCAD University. Her publications include Passionate Collaborations: Learning to Live with Gertrude Stein, and, since 2009, a photo/poetry blog entitled Visible Poetry: Aesthetic Acts in Progress.

About the Art Libraries Society of North America
Founded in 1972, the Art Libraries Society of North America is a dynamic, international organization of more than 1,000 individuals devoted to fostering excellence in art and design librarianship and image management in the United States, Canada, and Mexico. The membership includes architecture and art librarians, visual resources professionals, artists, curators, educators, publishers, students, and others interested in visual arts information. To serve this diverse constituency, the Society provides a wide range of programs and services within an organizational structure that encourages participation at all levels.