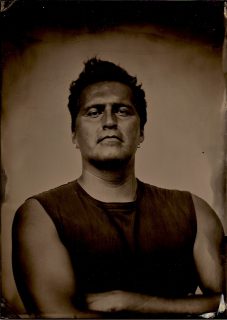 Adrian Stimson is a member of the Siksika Nation, Alberta. Adrian has a BFA with distinction from the Alberta University for the Arts, MFA from the University of Saskatchewan. His performance art looks at identity. His bison paintings evoke cultural fragility and resilience. His installation work examines the residential school experience that speak to loss, resilience and conciliation.

Adrian was a participant in the Canadian Forces Artist Program, which sent him to Afghanistan. Adrian has several public art projects including; Bison Sentinels, Regina; Spirit of Alliance, Saskatoon; Bison Heart, Sweetgrass Bison, Kowa’pomahkaiks: Animals that Roam the Prairie, Calgary.