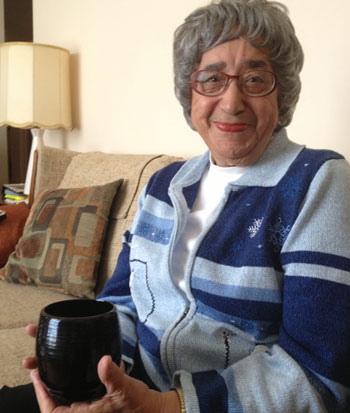 Audrey knew why the waitress wasn’t coming to take their order.

At the time, she was a young student from Halifax’s north end on a full scholarship at the Nova Scotia College of Art. She and few of the young women in her class, along with their instructor, decided to go out for lunch. They set out from the art college, which was located where the Five Fishermen Restaurant is today, to a popular spot on Barrington Street.

“My classmates didn’t know what was going on but I did,” says Audrey Dear Hesson, 83, recalling the long-ago lunch 65 or so years ago.

She was first black student to graduate from the art college. Audrey says incidents like that didn’t happen within the school but segregation and prejudice were her daily realities in 1940s Halifax once she stepped beyond its heavy wooden doors.

“The students at the art college were more open-minded, more mature. I think the ex-servicemen studying there made a difference,” says Audrey, settled in her favorite recliner in the corner of her living room. Some examples of her work—screen printed linens, hand-crafted silverware and tooled leather satchels—from her student days are on the coffee table; her pottery is displayed in the picture window of her Dartmouth home.

“Within the art college, I didn’t feel racial tension at all.”

More than a half-century since she graduated with the Lieutenant Governor of Nova Scotia’s medal for highest standing at the college, Audrey is enjoying renewed interest in her work. She is the only living artist whose work is included in DISCOVERY: African Nova Scotian Art Pioneers, on display to April 27 at the Dartmouth Heritage Museum. Other artists include Edward Mitchell Bannister (1828-1901), Edith MacDonald-Brown (1880-1956) and George McCarthy (1870-1906).

The spotlight has been beaming on and off since 1998’s In This Place exhibition at the Anna Leonowens Gallery; in preparing for the exhibition, curator David Woods discovered the picture of a young black woman sitting at a loom in a 1951 edition of The Chronicle Herald and tracked her down. Subsequent exhibitions include The Art of Audrey Dear Hesson at the Halifax North Branch Library in 1999 and The Soul Speaks at the Art Gallery of Nova Scotia in 2007.

All the work featured in those shows dates to her student days. After graduation, she worked for six years as a “craft worker” in the occupational therapy department at the Nova Scotia Hospital and left when she and husband Bob Hesson, who worked in the navy, started their family. The couple has three daughters.

“I’ve always knitted and sewed and made clothes for the kids … later, I was the volunteer who designed the posters and the tickets. And when a float for the Natal Day parade was needed, guess who got called?” says Audrey, with a laugh. “Creativity has always been a part of my life. I wasn’t a practicing artist but I was an active volunteer and I took on leadership roles. I can’t look back with regret because I have a wonderful life.”

Lately, with a prominent story in The Chronicle Herald about the Art Pioneers show, she’s been getting lots of attention from friends and neighbors who didn’t know about her artistic past.

“I’m a part of history and it’s kind of cool,” she says. “And here I am still kicking!”

Even so, she sometimes wonders ‘what if?’ What if she had been able to further her studies as D.C. MacKay, the principal of the art college, had urged her? She still has the glowing letter of recommendation he wrote for her, along with certificates of each of the classes she took. As well as being the school’s first black graduate, she was also among the first to enroll in the school’s new four-year art education program.

“I’m proud of what I accomplished and I feel emotionally connected to the things I made. They’re an expression of me. No, I don’t look back and regret but I can’t help but wonder how much more I might have done given the opportunity. Everyone looks over their shoulder I guess.”