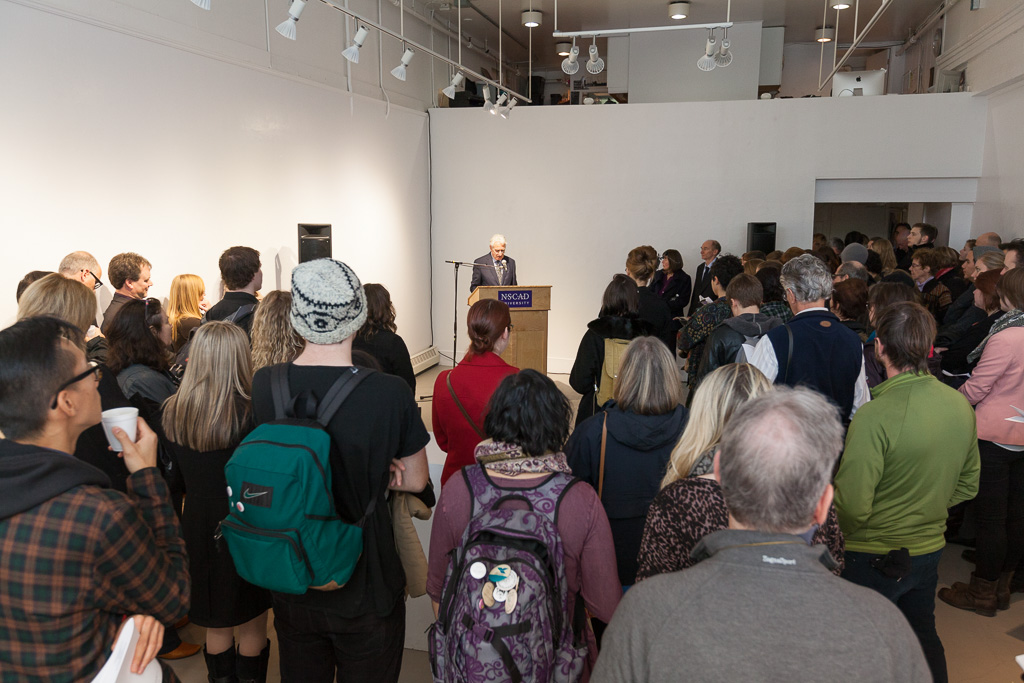 For the past two years, NSCAD’s Student Scholarship Reception has been held at the Anna Leonowens Gallery on November 6th, the birthday of the university’s founder Anna Leonowens.
The reception brings together two special groups of people: donors to NSCAD and student recipients of scholarships and bursaries.

Representing donors, Doug Pope spoke at the event on behalf of the Robert Pope Foundation, which honors the memory of artist Robert Pope through bursaries, graduate and undergraduate scholarships and painting scholarships it provides to students at NSCAD. He is a filmmaker, writer and teacher of art history based in Hantsport, Nova Scotia.

Here’s what he had to say:

I’m here on behalf of the Robert Pope Foundation, an organization that’s pleased to participate with NSCAD in programs that provide assistance to art students. If the foundation can offer some relief from the high cost of education, then we’re pleased to do so.

The foundation was started by my father and mother after the death of my brother, Robert Pope, who was a graduate of NSCAD in the early 1980s. Robert’s development as an artist was complicated by his diagnoses with Hodgkins Disease just months after his graduation. This cancer cut short his brief ten-year career. The paradox of Robert’s career is that as he became more ill, he also became more focused and productive. His art became both more autobiographical and more public, and despite the fact that his art treated the difficult subject of illness and healing, the work touched many people.

After his death, my father and mother purchased a van and loaded it up with crates of Robert’s paintings, which they toured to Toronto, Montreal and Vancouver, Los Angeles and New York, London, Dublin and Sydney, Australia as well as many other places. They exhibited these paintings in art galleries, in hospitals, in government embassies, universities and convention centers. They met presidents and prime ministers, doctors and educators, artists and patients, reporters and lay people. They told Robert’s story in newspapers and televisions all over the world.

I tell you this because that’s how the foundation began with two old people, in their 70s at the time, on the road, promoting something they believed in very much. Neither of my parents knew much about art, but they saw with their own eyes how art could have a powerful effect on people, a transformative effect, starting with themselves. Robert’s art changed their lives and they used it to open doors to change other people’s lives.

This is why the directors of the Robert Pope Foundation want to support other young artists. It’s impossible to predict what effect art can have. Just as Robert’s art has left a legacy that we hope will be helpful to others, so too we have confidence that the next generation of artists will be no less influential and inspiring. Believe in yourselves, believe in your art and good things will happen. Thank you and good luck with your future projects.

Speaking on behalf of students was Annie Onyi Cheung. From Toronto, Annie is a recipient of the Harrison McCain Scholarship in memory of Marion McCain and in the second-year of her Masters of Fine Art degree program. She makes videos, performances and installations.

Annie spoke about how the scholarship has impacted her NSCAD experience.

I worked for a few years before applying and being accepted into the NSCAD MFA program. My savings from working allowed me to cover the expense of moving here, but it’s the Harrison McCain scholarship that has allowed me to study at NSCAD and develop my art practice without financial burden. I am very fortunate to be the recipient of their generous gift.

The scholarships awarded to us as students at NSCAD are practical means to help us pay for our tuition costs as art students. Perhaps equally as important, they are a very real reflection of donors’ support for the arts and its students.

My own decision-making about pursuing art education and as a career has often been dogged by doubts and some insecurities about the practicalities of employment out in a world that seems to undervalue our endeavors. However, the many and various scholarships awarded through our school, tell me that art education and art making are pursuits that are valued by the community at large, and are clearly valued by our donors who choose to contribute and support our studies year after year. So I’d like to say thank you to the Harrison McCain Foundation for inspiring added confidence in my decision to continue learning at NSCAD as a masters student, for investing in my education, and for making it possible for me to explore and pursue any and all of my goals as an artist.