//RESPONSIVE: International Light Art Projects Halifax presents an artist talk by New York Artist Christine Sciulli. Christine Sciulli is a visual artist whose primary medium is projected light. “Her work consists of intersections of the geometry and an intuitive sense of how to use everyday materials to give a sense of “spatialisation” – she plays with how we perceive the world around us in a way that leaves you with a kind of eerie sense of timelessness.”(Paul Miller aka DJ Spooky)

Sciulli’s ROIL was shown at Brooklyn’s Smack Mellon Gallery in early 2016 and it was awarded a Lighting Award (UK) and Lumen Citation from the Illuminating Engineering Society. Her work was included in the American Academy of Arts and Letters 2014 Invitational Exhibition of Visual Arts. Her projection installations have been shown in numerous galleries and museums including the Shirley Fiterman Art Center, Parrish Art Museum, Islip Art Museum, South Fork Museum of Natural History, Frederieke Taylor Gallery, Edward Hopper House Art Center and Smithsonian Affiliate Annmarie Gardens, as well as in International light and music festivals. She was the recipient of a Lower Manhattan Cultural Council Grant for her public art project Intercepting Planes X. Christine was commissioned by the Global Poverty Project to create her installation, Expanding Circles, projected onto 2,500 people, for the 2013 Global Citizen Festival. Sciulli will have a solo show at Guild Hall Museum in East Hampton, NY in February 2019, and will be part of Responsive, a light art exhibition in Halifax, Canada.

Christine Sciulli holds an Architectural Engineering degree from Penn State University, graduating as a Besal Scholar, as well as BFA and MFA degrees in Combined Media from Hunter College, where she was awarded the Esther Fish Perry Award, BFA merit award, and the Leutz/Reidel Travel Grant.

As part of //RESPONSIVE Christine will debut a new, commissioned work at the Dalhousie Art Gallery in September with the support of the Canada Council of the Arts and Anna Leonowens Gallery, NSCAD University.

//RESPONSIVE: International Light Art Projects Halifax launches this September 25, 2019 at 6pm. This 4 day exhibition will showcase 16+ international artists who use light as a primary medium in their practice.

This lecture is presented with the support of the Canada Council for the Arts and Probst & Partner of Antigonish. 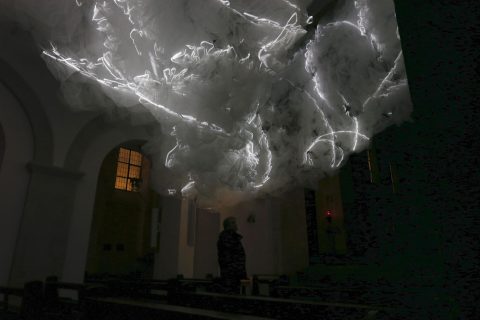 EFFUSION at EVI LICHTUNGEN, Jan 25 to 29, 2018. Hildesheim, Germany. An international light art biennial project organized by Bettina Pelz and Klaus Wilhelm. A multitude of artistic installations and interventions in places of cultural history, religious sites, and philosophical salons will address the connection between physical properties and symbolic qualities of light.