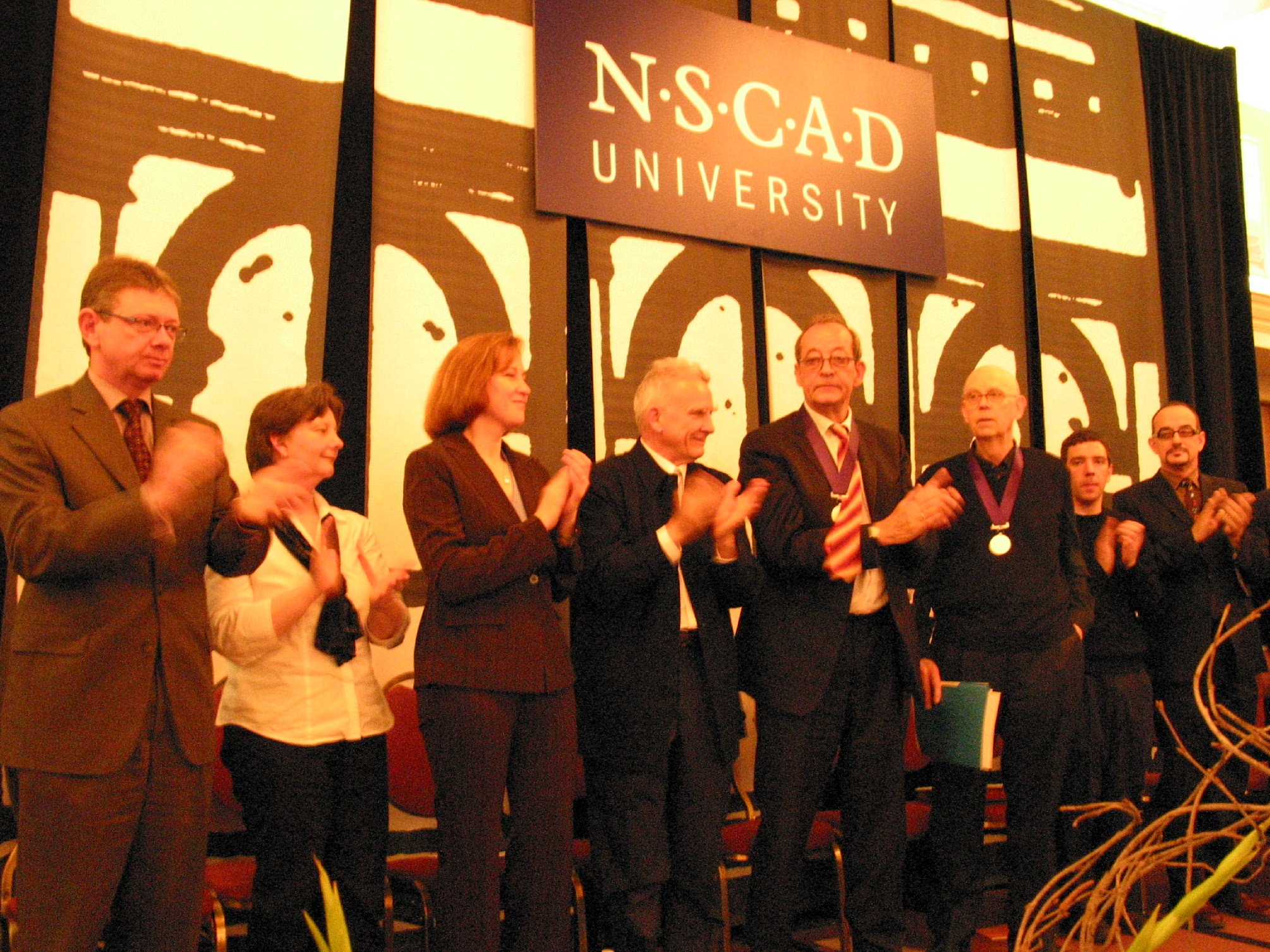 Claes Oldenburg and Kasper König have a long history of collaboration in the international art world. One of their publishing projects involved NSCAD in 1973, and the artist and the curator are returning to Halifax 22 years later to receive honorary degrees, along with Mr. Oldenburg’s creative and marital partner, Coosje van Bruggen. The academic honour is timely, in a year that has seen the revival of the Press of the Nova Scotia College of Art and Design.

Among the first titles released this year is a new edition of Raw Notes, a publication of original manuscripts from Mr. Oldenburg’s happening and performance art of the late 1950s and early 1960s. Professor König, currently director of Museum Ludwig in Cologne, Germany, was the founding director and editor of the Press at the time of the initial publication of Raw Notes in 1973.

While in Halifax, Mr. Oldenburg will create a new print in NSCAD’s Printmaking area, to be sold in a limited-edition boxed set along with signed copies of Raw Notes. As a visiting artist at NSCAD in 1974, Mr. Oldenburg created an edition of prints for the Lithography Workshop, titled The Office A Typewriter Print. The book is an indispensable source for the less well documented performance aspects of his work, with stage plans, scores, program sketches and more than 200 annotations.

A well-known international curator, Prof. König was also involved in the 1966 exhibition Claes Oldenburg in Stockholm, as well as Mr. Oldenburg’s Mouse Museum project at documenta 5 in 1972.

Mr. Oldenburg and Prof. König will attend the April 24 convocation ceremony in Halifax to receive the Doctor of Fine Arts, honoris causa, with Ms. van Bruggen receiving her honorary degree in absentia.  Approximately 170 NSCAD students will receive graduate and undergraduate degrees that day and the university is hosting a number of special graduation exhibitions, artwork sales and screenings throughout the week.

Claus Oldenburg and Coosje van Bruggen
Mr. Oldenburg set new terms for sculpture in the 1960s, with soft sculptures and colossal civic monuments of ordinary objects that were definitive examples of early Pop art. Based in New York, he and artistic collaborator Coosje van Bruggen have created more than 40 large-scale urban works across the U.S., Europe and Asia (see www.oldenburgvanbruggen.com). The couple has also broken the boundaries between architecture and sculpture in a series of partnerships with architect Frank O. Gehry: the performance Il Corso del Coltello, Venice, and traveling Knife Ship, 1984-88; Binoculars, Los Angeles, 1991; and the current Collar and Bow project, for the Disney Concert Hall in Los Angeles.

Born in 1929 in Stockholm, Sweden, Mr. Oldenburg studied at Yale University and The Art Institute of Chicago. Retrospectives of his work have been shown at New York’s Museum of Modern Art and the Solomon R. Guggenheim Museum; the Stedelijk Museum, Amsterdam; and the National Gallery of Art, Washington, among others.

Ms. van Bruggen holds a master’s degree in art history from the University of Groningen, the Netherlands. She has worked as an international independent curator, contributor to Artforum and Senior Critic in the Department of Sculpture at Yale University School of Art. Along with extensive writings on Oldenburg’s early work, she has authored books on John Baldessari, Hanne Darboven, Bruce Nauman and Mr. Gehry’s Guggenheim Museum Bilbao.

Kasper König
From 1972 to 1976, Prof. König was Associate Professor of Art History and founding director of the Press of the Nova Scotia College of Art and Design. Under his direction, 20 artists’ writings and original source materials were published, including the widely acclaimed Nova Scotia Series. His publications featured artists who shaped and defined contemporary art in the 1960s, such as Bernhard Leitner, Yvonne Rainer, Simone Forti, Steve Reich, Hans Haacke, Donald Judd and Michael Snow. Like the Lithography Workshop, the Press stimulated aspects of the academic program, attracted major visiting artists to Halifax, and heightened the college’s presence in the international art scene.

Since relocating to Europe, the father of four has curated major exhibitions around the world, such as In-Between Architecture for EXPO 2000 in Hannover, Germany; Sultan’s Pool in Jerusalem, 1999; Gerhard Richter’s Malerei, in Paris, Bonn, Madrid and Stockholm, 1993-94; and Eight People from Europe, the 1998 opening exhibition for the Contemporary Art Wing of the Museum of Modern Art in Gunma, Japan. He initiated, organized and curated the now-famous Skulptur Munster, the giant outdoor sculpture exhibition that has taken place every decade since 1977. It is due to resume in 2007 and 2017 under his direction.

He has taught at the Stadelschüle and was founding director of Portikus Frankfurt am Main, renowned as a foremost exhibition centre for avant-garde and modern art. Born in 1942 in Mettingen/Westphalia, Germany, Prof. König studied art history at the Courtauld Institute of Art in London, and anthropology at the School of Social Research, New York. He has written and edited numerous art publications, including the Andy Warhol catalogue that accompanied the 1968 exhibition at the Moderna Museet, Stockholm. Now in its fifth edition, it is one of the seminal art books from the 1960s.