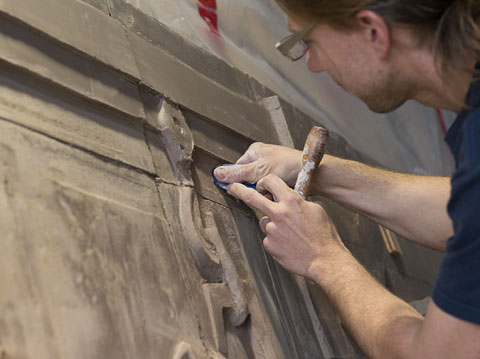 Commemorating the history of steelmaking

For more than 20 years, Doug Bamford has wanted to make a large-scale ceramic wall mural. Now he’s got the commission he’s been waiting for.

“I’m so excited to have this opportunity to prove the technologies I’ve been working on all these years, as well as to show what this beautiful facility, the Port Campus, can accommodate,” says Doug. “It really is a wonderful facility, with large studio spaces and state-of-the-art equipment.”

NSCAD’s senior ceramics technician is actually working on two public art commissions, both to commemorate the history of steelmaking in Sydney, Cape Breton.

Once complete, one will be the largest terra cotta wall in Canada, measuring two and a half metres high by 15 metres in length. The second commission comprises seven life-sized bronze figures which will represent a cross-section of Sydney’s population starting with a First Nations person and other heroes such as a housewife, an industrialist, a writer and steelworkers.

“To me, they are all heros–to leave your home country and move to remote Cape Breton to work in a Dantesque inferno or be the wife of the steelman. This took courage.”

The commissions will be installed at the new park on lands where steel was once produced. For the past decade, the site of the former Sydney steel plant, coke ovens and tar ponds has been under remediation. The park is slated to open on Labour Day weekend.

All winter, Doug has been working on the terra cotta wall in NSCAD’s Institute for Applied Creativity space adjacent to the Port Campus. His assistant and collaborator is Fenn Martin, a 2006 NSCAD grad and practicing ceramic artist who lives in Antigonish.

The clay is being hand carved into a narrative frieze which depicts the steelmaking process: from coal to coke to molten ore, and finally, steel rails. Once fired, the clay will be as hard and as durable as stone.

“The narrative is bookended by the beautiful landscape of Cape Breton. To the left, is the landscape under the stewardship of the Mi’kmaq. To the right, is the post-industrial future of this reclaimed space—an attraction instead of a blight.”

Doug, who divides his time between Halifax and Lunenburg, collaborated with artist Stephen Braithwaite and writer George Elliott Clark on North is Freedom, the six-metre high Cor-ten steel sculpture in front of the North Branch Library on Gotigen Street. He also collaborated on a two-part sculptural work, Regina Lace, which recognizes the diverse groups of immigrants who settled in the City of Regina.

Doug holds a BFA and BED from NSCAD (1995) and a diploma from the Sheridan School of Design.