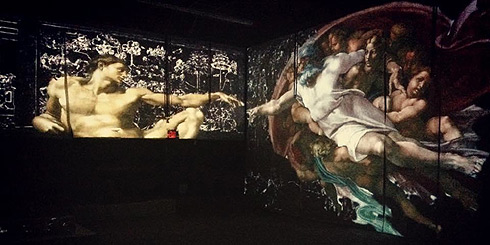 David Clark and the art of collaboration

There are more exciting things happening in the NSCAD Academy building.
Not only is The Dome Project well underway and with a prototype almost completed, but NSCAD’s own David Clark, Associate Professor in Intermedia, is working with 2b Theatre Company on the play Unconscious at the Sistine Chapel, written by Michael MacKenzie and directed by Anthony Black, with projection design by Daniel Oulton.

After visitors got a sneak peek during Open Doors Halifax on June 4 and 5th, the play will have its premiere in Paul O’Regan Hall, Halifax Central Library, from June 15 to 26. It is presented as part of Eastern Front Theatre’s STAGES festival.

Unconscious at the Sistine Chapel tells the story of an unlikely encounter between Minna Bernays and Nora Barnacle, along with their partners Sigmund Freud and James Joyce. Funny and smart, the play imagines a collision between two of the greatest thinkers of the modern period and the women who inspired them.

What sets this play apart is its innovative storytelling. David Clark has been collaborating with 2b Theatre to add projections and some 3D graphics into the performance.

He couldn’t resist the opportunity to collaborate when it was presented to him. “I have strong interest in both the technology (video projection) and the subject matter (literary history and psychoanalysis) of the play,” he says. “I also have a lot of respect for the work of Michael MacKenzie and Anthony Black.”

Clark has mostly been involved with the research on the technology, along with consulting on some graphics and doing some work in graphics design for the play. He’s has enjoyed having 2b Theatre rehearsing right next to his office in the Academy Building.

“I think this is beneficial from a research perspective in that both 2b and NSCAD are working with a set of technologies that are evolving rapidly and it’s good to compare notes and work side-by-side.”

Clark also says this is not the first or the last when it comes to his collaborations with 2b – they worked together last summer on a Nocturne installation and have more joint projects in the works.

These types of collaborations are beneficial for both sides involved. NSCAD students get offers to work on these projects, and Clark says he’s also getting members of the theatre community involved in some art projects, such as a few of Clark’s videos and a radio show for CKDU that is being produced at NSCAD.

“It’s good to be involved in creative projects and see the inner workings of other artists projects happen,” says Clark.

“Media arts have natural affinities with the performing arts, and I have specifically reached out to theatre, radio and dance in the community to be involved. It helps me as an artist and us as an institution to look widely at the arts.”If you go: