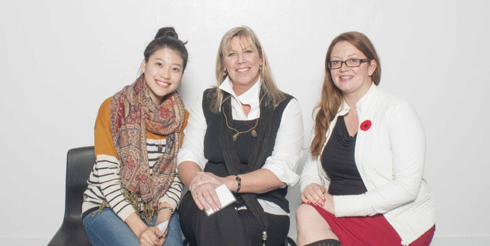 Upon meeting Kim Knoll one is immediately struck by her kind and inviting spirit. She is a giver; giving comes naturally to her and this is not surprising given her background in social work.
Kim is currently a member of the NSCAD Board of Governors and the founder of the J. Dukelow Bursary. Since 2010 the bursary has awarded more than $27,000 to 50 NSCAD students. While chatting over tea in a busy café in downtown Halifax, Kim told her story of being a donor at NSCAD University and how it has positively impacted her life.

When Kim joined NSCAD’s Board of Governors she was set on becoming involved with the scholarship committee.

“Often an art student isn’t motivated by financial payoffs; there may not be the guarantee of a high-paying job waiting for them upon graduation. The pursuit of this degree is truly a labour of love, and it takes so much focus and energy that there is little left over for part-time work. The reality is that so many highly talented students are often forced to work part time to make ends meet, thereby often sacrificing higher grades in the meantime,” she said. “This often negates their chances for scholarships. This is why we made the criteria more need-dependent than grade-dependent, higher grades don’t always accurately reflect talent, often it’s reflective of life choices.”

While working on the scholarship committee, Kim recognized a need for more donors and wanted to contribute in some way, but she wasn’t sure of how. In the end she decided to hold a girls’ night with her closest friends, encouraging donations in exchange for dinner. She invited NSCAD scholarship recipients, and asked them to share stories of how the funds made a difference.

“They were such wonderful students and they moved everyone to be very generous. We had a very successful first year, and repeated it a second year.”

The next step was to create a name for the scholarship, and she decided to name it after her parents, Dr. Jim and Jean Dukelow. “I obtained my desire and my love of art from my father, and my love of friends from my mother.”

Like herself, her father loved to paint and found healing in the stroke of a brush.

“I watched the way that it (painting) altered his life; it gave him motivation and passion to move forward. Both of them suffered a great deal of illness at the end of their lives, but that also had its gifts,” said Kim. “The way my dad looked after my mother was inspiring, and through it all, his paintings gave him both relief and joy. He worked on them right up until at the end of his life, it was what motivated him to get up each morning.”

An unexpected gift from setting up the bursary has been the notes of appreciation she’s received from students.

“Some have brought me to tears, and I’ve even received small gifts from people, often their own work.  One time at a donor reception this wonderful young girl came up, she handed me flowers and told me how important that support was, how it helped her through a troubled time… It was just really moving,” she said.

Kim strongly encourages donors and recipients to meet. Although there are often concerns regarding confidentiality, she says the personal connection of meeting emboldens donors to give again and to continue to follow and support artists as they begin their career. Whenever she can she tries to follow their work.

“I like to see how they’re doing, and Chris (Chris McFarlane, NSCAD Stewardship Co-ordinator) is really good with keeping me abreast of who’s having an exhibition and where and when to view it. I think that’s really important for donors to see,” said Kim.

Kim no longer holds her girls’ nights, but she’s been fortunate enough to have friends who continue to give to the bursary because of the connections they made at that first dinner. She hopes that potential donors are able to see how their contributions really make a difference.