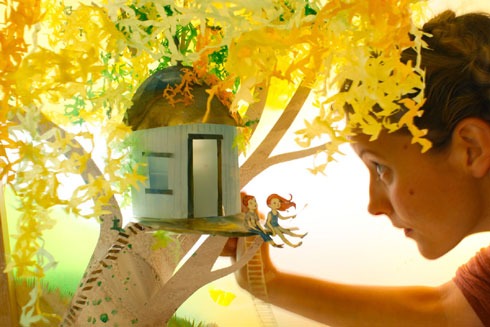 Some gifts can change your life. So it was with Elly MacKay, whose woodworker husband Simon surprised her by making her a tiny wooden theatre.

“My daughter Lily was a baby then and I was itching to find the joy of making again,” says Elly, of the gift from several Christmases ago. She and Simon (BFA 2003) met at NSCAD, married and settled in Owen Sound, Ontario. They have two children, Lily, age six, and two-year-old Koen.

The theatre and the images she creates led to the Etsy site, which in turn led to a publisher seeing her work and asking if she would illustrate a children’s book.

She now has a few titles to her name, including Best Gifts (Fitzhenry and Whiteside, 2013), If You Hold a Seed (Running Press, 2013) and the just-released Shadow Chasers (Running Press Kids, 2014), which she both wrote and illustrated. Fall Leaves (HMH Books for Young Readers) is due out in the fall and Butterfly Park (Running Press) next spring.

“This is exactly what I wanted to do,” says Elly, who cites NSCAD faculty member and noted wildlife illustrator Jeff Domm as a help in getting started. “This is my dream, to create work and run my own business, although I must say it’s been a struggle to get here.”

The dream took shape in hazy outlines when Elly, now 32, was growing up on the Bruce Peninsula. Her parents, Joan and Steve Irvine, are both artists. Elly’s mom made pop-up books and her daughter “was her guinea pig,” Elly says with a laugh. She adds her friends served as a focus group, gathering at their house and testing out books in development. Elly started making her own three-dimensional creations such as zoetropes and tunnel books, and, as a teenager, even had them on display at a Toronto gallery.

Now she works out of her home studio, located in the attic of her rambling century-old home, peering into fairytale worlds through the proscenium of the little theatre Simon made.

Her work is such an intoxicating blend of magic, beauty and originality that it’s attracted a lot of attention. It’s been been featured on the pages of Oprah Magazine (“Picture Perfect”) and Chatelaine (“Meet Chatelaine’s new favourite artist, the talented Elly MacKay”).

As a young mom, she is closely attuned to the perceptions of children and their imaginations. “I’m interested in how children perceive the world and how their reality intermingles with fairy tales. I’ve stumbled into a place where there are more possibilities,” says Elly, who seems perfectly suited to do new covers for a re-issue of the entire eight-book Anne of Green Gables series and the three books of Emily of New Moon too.