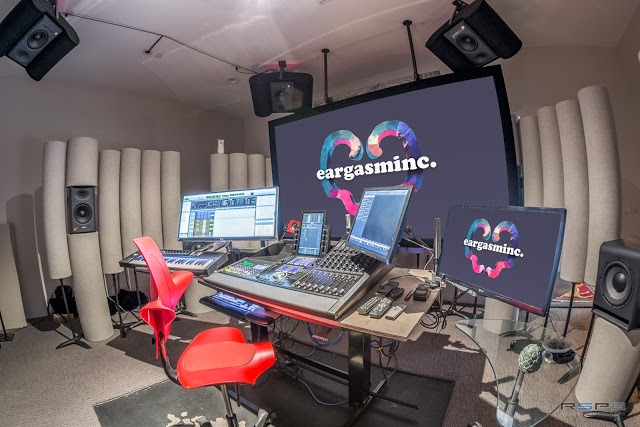 If you follow Game of Thrones, you’ll know the scene from season 4. After hearing about the plight of a shepherd’s three-year-old daughter who was burned alive by her dragons, Daenerys goes down to the catacombs and imprisons two of her three beloved dragons with massive chains about the neck.

As Daenerys turns her back on them and walks away, the dragons make the most heart-rending noises—neighs, squeals, quacks and screams combined in one big sonic stew—articulating their shock, helplessness and sadness all at once.

The episode was so affecting that sound designer Paula Fairfield and her team were nominated for an Emmy Award, her second nomination for Game of Thrones and sixth nomination overall. “I was asked to make everybody cry in that scene, to convey the soulful connection between the dragons and Dany,” said Paula Fairfield, on the phone from her home in Los Angeles.

“There was a lot of stuff going on in my life,” she continued, listing the ending of a relationship, moving from her long-time home and the recent deaths of her brother, sister, and father as just some of the things she was weighed down with. “Somehow I was able to channel all that emotion in my work. I was sharing my experiences (through sound) and it was incredibly cathartic.”

For Game of Thrones, she creates sounds for the series’ array of fantastical creatures, not only dragons but white walkers, mammoths, giants and ice zombies. (Game of Thrones won four Emmys out of the record 19 it was nominated for; the Emmy for outstanding sound editing went to the team for the series Black Sails.) Filming on the fifth season of the fantasy series, based on the books by George R. R. Martin, started in July in Croatia and Ireland; episodes are set to air on HBO in April 2015.

As a sound designer in Hollywood, Paula has worked on some big TV series, not only Game of Thrones but Lost, The Strain and The River. She has also worked on films ranging from the action-packed Snow White and the Huntsman, the special effects-laden Spy Kids sequel and Crazy Heart, about a down-and-out country music star. She credits her success in part to her time at NSCAD, arriving with a “bad perm” from Bridgewater, N.S., and “not having been exposed to a whole lot before.”

She still thanks her lucky stars that she was accepted to study, although she doesn’t really know what anyone saw in her portfolio.

“I would say being at NSCAD changed my life and put me on this road,” she said. “I think of all those conversations I had, with Jan Peacock and others, about conceptualizing and narrating strategies—all that learning goes right into my work. It’s what I deal with every day.”

Entering Foundation year, Paula thought she would pursue graphic design, but quickly became enamoured of adding sound to pictures and soon after scored an amazing summer job at the NFB in Halifax. After graduation, she did a training program at the NFB’s Studio D in Montreal and then went to Toronto where she co-managed the artist centre Charles Street Video. Sixteen years ago, she made the move to Los Angeles where she now runs her company (with the great name) Eargasm Inc.

As an artist, sound is her medium, and believes her most essential skill is the ability to relate to other artists—to think and talk conceptually on group art projects, which is essentially what TV shows or films are. As rewarding as her career is, she’d like to achieve greater balance in her life by returning to art making and creating interactive audio installations.

“I’m super excited by what I do, which is to create weird sounds.”