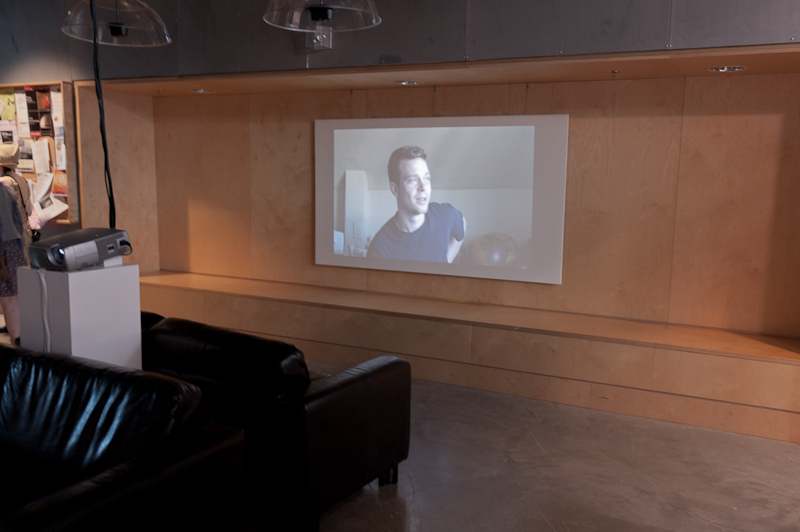 Originally from Caracas, Venezuela, Mr. Mora is graduating with a Bachelor of Fine Arts (Interdisciplinary). He was awarded the $5,000 purchase prize for his artwork, a video installation called Interlocution, which becomes part of the President’s Collection at NSCAD. As well, in recognition of support and mentorship by faculty and technicians, the Media Arts Division received $1,000.

For Interlocution, Mr. Mora interviewed his friends and then dubbed their voices with his own. The 11-minute video is installed as a wall projection in front of a couch for viewers to sit on.

In a statement, jury members (Peter Dykhuis of Dalhousie Art Gallery, Jamie MacLellan of HRM’s Cultural Affairs, and Eleanor King of the Anna Leonowens Gallery) said they were impressed “by the interruption of perception that occurs when Mora’s voice replaces the voices of those ‘acting’ in the work … The artist asks us to question assumptions of language and gender, and provides the viewer a snapshot of this moment in time. Jury members were also taken by the work’s heartfelt portrait of current NSCAD students, and felt that in this was an appropriate addition to the collection this year, at the significant benchmark of NSCAD’s 125th anniversary.”

“We are incredibly grateful for this outpouring from members of the business community who have so generously demonstrated their support for the visual arts and our emerging creative leaders,” said Jim Mills, a member of the NSCAD Board of Governors.