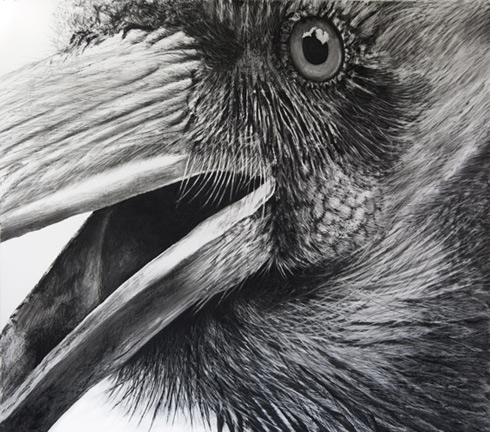 Karen Bondarchuk spent only three semesters at NSCAD, but it was enough to change her way of thinking and her approach to art.

A transfer student from Fanshawe College in London, ON, she studied video and sculpture at NSCAD, graduating in 1989. Professor Jan Peacock had a huge influence on her as a mentor and a friend.

“NSCAD shaped who I was in a significant way,” says Karen (BFA 1989), an interdisciplinary artist and associate professor at Western Michigan University in Kalamazoo. “My conceptual framework comes from my NSCAD years, no doubt about it.”

With a conceptual approach to her art, Karen confesses her amazement at being named “Master Artist” by the Woodson Art Museum in Wisconsin in association with its annual Birds in Art exhibition last fall. But then again, perhaps it isn’t surprising at all. For years, Karen has been obsessed with the corvid family of birds, which includes crows, ravens, jays, and rooks. She’s produced magnificent charcoal portraits of the birds and human-sized sculptures created from rubber shards and scraps of blown-out tires picked up on the side of the highway. Recently, every day for the duration of a year, she painted or drew a bird in a series called Ergo Sum: A Crow a Day.

But is her art really about birds? Yes, and much more besides.

Her large-scale portraits, for example, explore questions of language and communication between humans and animals. Her sculptures, started when the automotive industry in Michigan took a nosedive 10 years ago, evoke human suffering tied to the downturn in the economy. Her Ergo Sum: A Crow a Day series was undertaken in homage to her mother who has advanced dementia; at times funny, somber and quirky, the project allowed her to remember her mother as she was and grieve her loss. “She’s still alive but not with us anymore.”

Both loved and despised, ravens and crows provide rich subject matter; in some cultures they’re regarded as bringers of light and life, while in others, they’re omens of death and darkness. In doing further research, she’s astounded at their intelligence: their ability to make plans and carry them through; to pass on knowledge through generations; to communicate with each other; to use tools. “They rival primates in their ability to think and function,” she says. Clearly, there’s much more to investigate.

In naming her a Master Artist, the Woodson Art Museum pays credit to her talent, originality and the profound thought she invests in her work.

“I feel very honored by this title. It’s overwhelming and humbling. I think what they appreciate in my work is what the bird can represent in a myriad of ways.”