NSCAD Makes its Mark in Landmarks

NSCAD students and alumni are making their mark as part of the national Landmarks 2017 project, a Canada 150 Signature Project, curated by Partners in Art and supported by Canadian Heritage.

Landmarks 2017 is a series of contemporary art projects taking place in and around Canada’s National Parks and Historic Sites. It involves 12 leading Canadian artists, seven curators, and students from 16 universities across the country.

“We’re hoping we can build awareness that there are a lot of things going on in this neck of the woods,” says David Diviney (MFA 1998), part of an Atlantic curatorial team along with Ariella Pahlke and Melinda Spooner (MFA 1999).

A look at the development of Ursula Johnson’s re(al)-location repeat print.

Mi’kmaw artist Ursula Johnson (BFA 2006) is one of the marquee artists involved. From Eskasoni, Cape Breton, her project, (re)al-location, is situated at Cape Breton Highlands National Park. It will launch with a performance and community feast at Macintosh Brook Campground on Saturday, June 24. Expect moose to be on the menu.

“It’s really important to share food together if you are trying to build a community,” explains Johnson, recently named the Atlantic finalist for the prestigious Sobey Art Award. “Food and conversation and music are key.”

(re)al-location engages the Mi’kmaw philosophy of Netukulimk, or self-sustainability, in a shared examination of the ecology of Cape Breton Highlands National Park past, present and future. Questions Johnson poses through the work include: Whose responsibility is conservation? Are you a steward? What will your future be like?

A multi-pronged project, one part of (re)al-location is the creation of a repeat pattern for textiles based on the boreal foliage of Cape Breton Highlands National Park. In NSCAD’s fashion studios, a crew of seven students and alumni under the eye of fashion technician Leesa Hamilton have been enlisted to sew everything from active-wear garments to aprons and oven mitts from the fabric for the performance on June 24.

NSCAD’s contribution to Landmarks also includes the work of 11 students in Kim Morgan and Steve Higgins’ Advanced Sculpture Workshop class. The students spent the winter semester pondering notions of monument and anti-monument and then making art that responds to the landscape in site-specific applications.

They also spent a lot of time listening. The professors brought in guest speakers from a wide range of disciplines to add their reflections to the mix. These included an oceanographer, wildlife expert, filmmaker and artists of various sorts.

“We were offered the opportunity to hear about the work of a wide range of artists and thinkers, and for me it felt like a real privilege to be allowed to hear discussion around different national, local and cultural perspectives,” said Edith Hicks, an exchange student to NSCAD from the Edinburgh College of Art in Scotland. 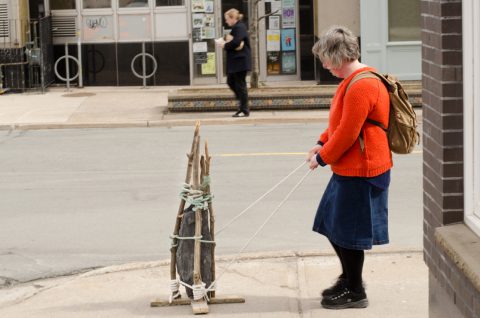 Exchange student Edith Hicks with a killick she made. From the Landmarks website: “From the North Pole to the South End, The Living Procedure’s ‘Killick Hitch’ seeks to anchor the new and the temporary using an object rooted materially and conceptually in its surroundings. It is a traveling geography of person and place, effort and inertia attesting to the physical and emotional endeavor involved in both staying and moving on.”

The students’ projects are now on view, and there are a number of ways to see them: 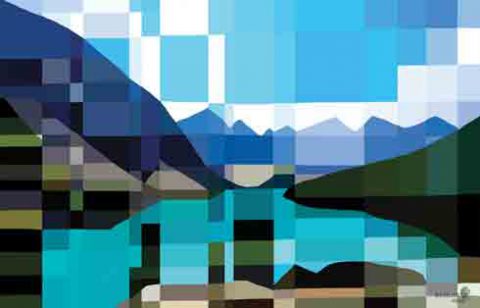 Some of the students also have work on display at sites in Halifax’s Point Pleasant Park. Pick up a map card at the Anna Leonowens Gallery to visit installations by Lorraine Albert, Matt Harrison, Isabelle Foisy, Philip Nuttall, Sasha Malakhova, Sheryne Tavender and David O’Shea.

An installation, Steps Forward, by master’s student Lorraine Albert will go on display at Cape Breton Highlands National Park from the end of June to October.

Or, let your fingers do the exploring. On the Landmarks2017 website you can check out projects by NSCAD students as well as see all 100 projects from coast to coast to coast. 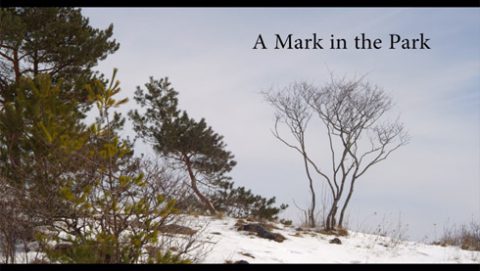 A still from Jack Hart’s A Mark in the Park. The video records a performance created and performed by non Aboriginal artist Jack Hart and close friend Louise Morehouse, a member of the Sayisi Dene First Nations.

Lorraine Albert, like many of the Indigenous artists involved in Landmarks, took the opportunity to use her work not to celebrate 150 years, but reflect on a much older relationship – that between Indigenous people and the land. In Steps Forward, 42 bronze plaques will be placed on the “nose” of 42 steps, located in Cape Breton Highlands National Park. Each plaque is laser etched with the text from the Peace and Friendship Treaty signed in 1752 between the British and the Mi’kmaq.The Treaty of 1752, signed by Jean Baptiste Cope, described as the Chief Sachem of the “Tribe of Mick Mack Indians” inhabiting the eastern part of Nova Scotia, and Governor Hopson of Nova Scotia, made peace and promised hunting, fishing and trading rights.“This location is very popular and visited by tourists and locals alike.  It’s a great location for a work that addresses topics of land, ownership, treaties, reconciliation, and people,” says Albert. “The goal of this more subtle intervention is to get the viewer to slow their pace as they head back up to stairs, read and question the text, and reflect on the steps needed to be taken to begin true reconciliation.” 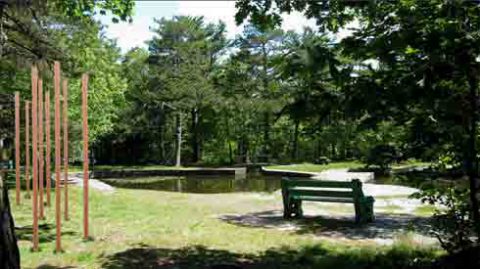 Embodied Site by Lorraine Albert is a site-specific work that makes use of three locations in Point Pleasant Park in Halifax. Lorraine also has an installation Steps Forward at Cape Breton Highlands National Park.