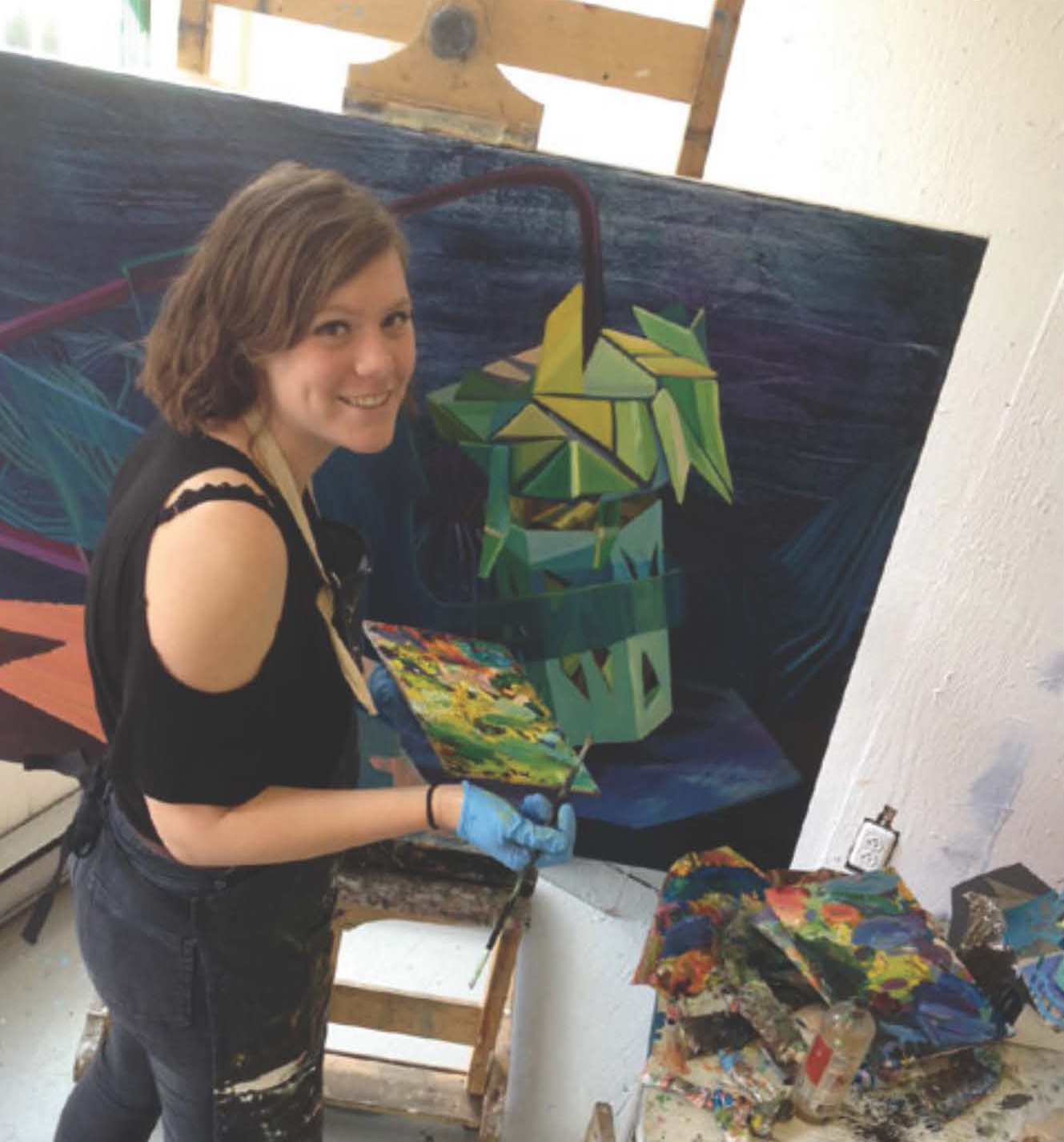 Artist Rachel MacFarlane finds herself spellbound by an ancient technique of improving one’s memory by using imagery. Called the “Method of Loci,” the idea is to create architectural spaces in the mind, dropping symbols or specific “loci” along a set path. When something needs to be remembered, one walks through the imagined spaces and retrieves memories.

The construction of the “memory palace” as a strategy to remember is an idea that goes back centuries, to ancient Greece and Rome, and later to Giulo Camillo, a Renaissance philosopher. The Toronto resident, who is at NSCAD University as part of the William and Isabel Pope Artist’s Residency in Painting , finds echoes of the idea in her own work—lush, large paintings of fantastical spaces—and on the Internet.

“What we see and what we know is provided to us in places that don’t really exist,” she says.

As artist-in-residence, Rachel has eight weeks to explore and work in her temporary home—a fourth floor studio on the Granville Campus. The residency will culminate with an exhibition, Memory Theatres and Datalands, from Nov. 19 to 30 at the Anna Leonowens Gallery. In Toronto, her work is carried by the Nicholas Metivier Gallery.

As “someone really into spaces,” she loves the historic labyrinthine campus and the light-filled studio, with its tall arched windows and white walls. “These old buildings are pretty inspiring,” she says.

A 2008 graduate of OCAD University, Rachel remembers the Eureka moment that set her on her current path. It happened during a drawing marathon class led by artist Ed Pien—he instructed the students to come up with a new subject to draw every three minutes. So Rachel picked up a piece of scrap cardboard and folded it quickly into a shape to sketch. She still uses that mode of working now—creating small maquettes, often of junk, and painting from them to create monolithic structures in bright brilliant colours reminiscent of video games or futuristic novels.

They’re paintings of abstracted spaces that viewers can choose to enter and wander about in.

“I think I was frustrated with contemporary art being so minimal and I really wanted to make paintings that provided avenues of some sort,” she says.

The residency is made possible at NSCAD for emerging and mid-career painters through the generosity of the Robert Pope Foundation. Robert Pope, a NSCAD graduate, was a social realist artist who died of Hodgkin’s Disease, cancer of the lymphatic system, at the age of 36 in 1992. By coincidence, Rachel waged her own battle with the same disease. She was diagnosed at the age of 23 and, after months of chemotherapy and radiation treatment, has been in remission for more than three years now.

Unlike Robert Pope, the disease didn’t affect her work, as much as it affected her approach to her work. Always a driven painter, she threw herself into her work with renewed vigor as soon as she was healthy again. And, she makes a point of seizing opportunities as they present themselves. Since remission, she’s completed artistic residencies in New York and Ireland.

“The clock is clicking way louder for me … you don’t think about these things, your own mortality, when you’re in your 20s, but I don’t stop thinking about it. It makes me just go for it.”