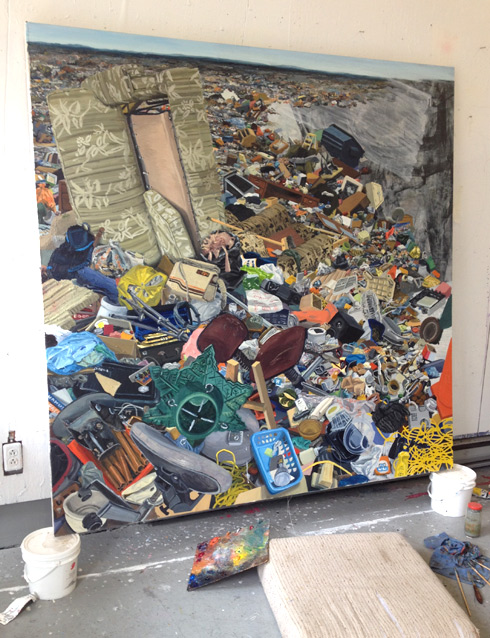 Tucked away in the Fountain campus’s studios is Colin Dorward, an artist with a quiet passion for painting and living life to the fullest. Sitting in his temporary studio facing Granville Street, Colin talks about his views on art, life, and being an artist in Canada.

What brings the Edmonton-born painter to NSCAD? He’s the recent recipient of the William and Isabel Pope Residency in Painting, established by the Robert Pope Foundation.

The two-month residency, now in its third year, provides emerging and mid-career painters with a $8,000 honorarium and studio space, culminating in a solo exhibition at the Anna Leonowens Gallery. The Foundation is named for Robert Pope, a NSCAD graduate and artist, who passed away from cancer in 1992 at the age of 35.

“A lot of the work I’m doing is speculative. It’s hard for me to talk about because I don’t know where I’m going yet,” he says.

“It’ll either be these pieces or whatever I’m making that’s spinning off from these or else possibly all new work, but I want to show this piece,” he adds, gesturing to a large canvas depicting a collage of objects reminiscent of an urban Alice in Wonderland.

Colin spends a great deal of time with each canvas articulating his message. His process is slow and methodical, even on a productive day. With an eye for detail, he feels out each painting, translating his unique perspective onto canvas and taking inspiration from the world around him.

“The stuff around you is not necessarily the stuff around you that you can see right in this moment. I walk down the corridor and I see someone’s painting and I kind of carry a little bit of that with me when I come in here. It’s more distant for sure but those things inform my work.”

Colin graduated with an MFA from the University of Ottawa in 2013. In dealing with the pressure of university: the scheduling, pacing of classes, critiques etc. he learned that time was a gift that could only enhance his work.

“Coming out of there (U of O) it made me realize that I could slow down even more to produce less work and spend more time with each painting. It seems like it’s realistic to think I’ll probably be painting for another 40 years, if I only make 10 paintings a year that’s still 400 Colin Dorwards running around in the world, which is a lot. If I double that it seems strange, I don’t think there’s 800 people who would want one,” he says with a laugh.

What draws Colin toward painting is the sustainability of it, in the way that age isn’t necessarily relevant, and that many painters produce their best work later in life. He’s also drawn to the freedom it gives you to explore other interests like the outdoors and music—interests that give back to his art.

“I want to have time to do other things in my life. A lot of times I’ll feel guilty like, ‘oh, I shouldn’t be doing this because it’s not related to painting.’ Then a year later, whatever it is that I was doing will come out in a positive way.”

Colin believes that it’s hard to be an artist in Canada and thrive: “I think artists in Canada historically have alienated themselves from the public and it certainly doesn’t help them convince the powers that be that artists deserve more funding.”

It’s a vicious cycle where “The artists don’t get funding, so they feel alienated, and then they make work that’s not accessible and so they don’t get the funding because people don’t like what they do.”

That being said Colin has been fortunate to be able to pursue painting for the past four years without having to supplement his income—something he is very thankful for.

“This residency is huge for me. I’m definitely really lucky to be here,” he says.